What lies hidden in permafrost?

What links a mysterious outbreak of anthrax in a remote corner of Siberia and the appearance of massive craters in Siberian tundra? And does the fact that both resulted from the warming of the Arctic and the thawing of permafrost mean that we can rest easy outside the Arctic circle?

Let us start by making clear what permafrost actually is. The term is a combination of two words: permanently and frozen, and denotes soil, rock or organic material which remains at 0°C or below for at least two consecutive years. The term suggests that permafrost remains frozen indefinitely and indeed it was long believed that this was the case. Only recently have scientists realized that climate changes lead to permafrost melting away, which makes the name a bit of a misnomer. 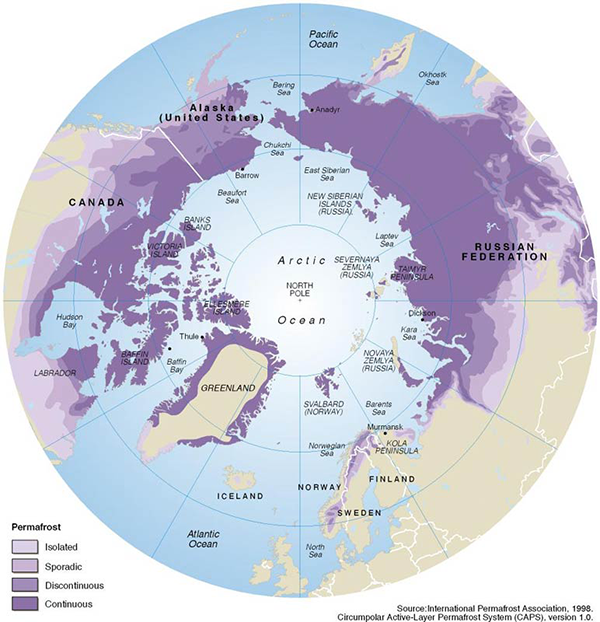 In the northern hemisphere, about a quarter of all land or – to be more specific – 23 million km2 of land are underlain by permafrost. Its thickness varies from less than a meter to over 1500 metres! The youngest permafrost formed during the so-called Little Ice Age a few hundred years ago, but the majority of it has been around for as many as 30 000 years, lasting through warmer intervals between subsequent glacial periods. The current warming, however, which is particularly visible in the Arctic, takes a heavy toll on permafrost, increasing the depth to which it thaws every summer. In many areas where permafrost occurs, the active layer (which is the layer that thaws and freezes again on an annual basis) stretches deeper and deeper every year. The thawing of permafrost is a serious challenge for buildings and other man-made structures found in polar regions. It is estimated that about 70% of all infrastructure may become damaged by 2050, which will affect over 3,5 million people living on top of permafrost.

But what does anthrax and Siberian craters have to do with the thawing of permafrost?

Back in 2016, Russia grappled with a mysterious outbreak of anthrax. A few dozen people were hospitalized, one died. It turned out the disease was spread by reindeer. Over 2000 animals became infected and yet initially nobody knew where the bacteria had come from. The most plausible explanation linked the outbreak to a heatwave which quickened the thawing of permafrost. What thawed out along with the soil was a carcass of a reindeer which had got infected with anthrax several dozen years before.

Another surprising phenomenon connected to the thawing of permafrost is the formation of enormous craters in Siberia, like the one which appeared out of the blue in Siberian tundra in 2020. A violent methane explosion flung ice and rock hundreds of metres outwards, leaving a huge, round hole in the ground. It was the seventeenth crater of the sort that formed within the Yamal and Gyda Peninsulas in Russia since 2013, when the phenomenon was first observed. The craters are believed to be associated with climate change and the increasing rate of permafrost thawing.

How come there’s methane in the thawing permafrost and what does it mean for the environment?

Permafrost may contain organic matter which has not decomposed due to low temperature. It acts as a lid, which keeps the frozen organic sediment deep underground. Its top layer, referred to as the active layer, thaws and freezes again naturally on an annual basis. Recently, however, the thawing process has intensified considerably. When the active layer thaws out, so does the organic matter contained within. Once this happens, microorganisms begin to decompose it, which leads to the release of carbon dioxide (aerobic process) or methane (anaerobic process). And both carbon dioxide and methane are potent greenhouse gases whose role in the amplification of global warming is second only to water vapour.

For centuries permafrost in the Arctic held tremendous amounts of carbon. Its current release into the atmosphere is a cause for concern in the far north and beyond, as it is likely to raise global temperatures even further.

How soon will it happen? Scientists know that even in case of violent climate changes carbon deposits trapped in permafrost will not be released all at once. The process may take tens or hundreds of years. There is no way to estimate the rate of carbon release with much accuracy, because any such estimate must take into account various scenarios of temperature growth, which in turn depend on our decisions regarding energy sources and consumption.

Subsea permafrost and its climate impact

The above scenario takes a sudden turn for the worse when we take into account greenhouse gasses released from subsea permafrost occurring beneath the seabed. Subsea permafrost has the temperature of about 0°C and underlies large areas of the continental shelf, or the sloping plains at the outer edge of the continent, which were exposed during ice ages but have since sunk under the ocean. Contrary to what the name implies, subsea permafrost did not form underwater. It formed on land only to be submerged when sea level rose by 120 m compared to what it had been 18 000 years before.

Subsea permafrost covers substantial areas of the continental shelf in the Arctic, with the East Siberian Arctic Shelf being the largest and most shallow shelf on the planet. Its overall surface area amounts to 2 million km2 and trapped underneath is the world’s greatest methane deposit.

The ongoing degradation of seabed permafrost may trigger methane release into the ocean and the atmosphere. Methane is the most common gas found in sediments frozen in permafrost and accumulated underneath. The warming of the sediments, which leads to permafrost thawing, is likely to cause methane release. Once in the water column, the gas may be transformed into carbon dioxide by the activity of microorganisms, a process which increases the acidity of ocean water. The remaining methane will rise up and enter the atmosphere above continental shelves.

Scientists investigating seabed permafrost compare the shelf to a champagne bottle, in which the gas accumulates and pressure builds up for only as long as the cork can hold it. The cork is seabed permafrost, which keeps the gas down, preventing it from entering the ocean and then the atmosphere. As long as the cover was impermeable, we had nothing to worry about. But once its continuity is broken, which it is now due to climate change, we have a serious cause for concern. Areas where permafrost has melted out become escape routes for methane, whose release will intensify along with the further melting of seabed permafrost.

If this wasn’t bad enough, scientists are still unsure how much methane will be released from underwater sources, which is why most climate models don’t even take it into account! And because it is quite obvious that positive feedback will further speed up the process, we may find even the most dire scientific scenarios to be overly optimistic.