The song of the humpback - Edu Arctic

The song of the humpback

Humpback whales, after being driven nearly to extinction, are making a steady comeback. They were hunted since the beginning of the 17th century for meat, oil and baleen.

In 1864, when the explosive harpoon was discovered, the intensity of whaling increased, making the global population of humpbacks dwindle by 90–95%. The year 1946 saw the establishment of the International Whaling Commission (IWC), whose aim was to protect whales and manage the whaling industry. In 1966, the Commission passed a ban on commercial humpback whaling. By that time, there were only about 5000 humpbacks left in the world’s oceans. It is estimated that before the whaling period their population stood at 128 000.

Due to the undertaken conservation activity, the size of the population is rising and has already exceeded 80 000 individuals. With the exception of a few local populations, the humpback whale is considered to be a species of least concern, which means that, on a global scale, it is not in danger of extinction. The growing interest in the humpback whale led to an increased understanding of the gentle giant’s life and behaviour. What the scientists have found out amazes and delights, and – at the same time – calls for a major review of the ways in which we perceive these animals, their relationships and emotions.

The Latin name Megaptera novaeangliae (which translates into “a big wing of New England”) is a reference to the humpback’s enormous pectoral fins, which may reach 4 metres in length. The tail fins measure 2–3 metres across and their underside is covered with unique patterns, which scientists make use of to distinguish one individual from another. The animal’s English name – the humpback whale – comes from a small hump located right before the whale’s dorsal fin. Humpback whales are dark on the back and light underneath. They live impressively long lives, reaching 50 or even 100 years of age, although scientists are not ruling out that the estimates may well be too low. Humpback whales reach the overall length of 14–17 metres and the weight of over 30–40 tonnes, which situates them among the largest animals in the world. They are only about 3–6 metres long and weigh approximately 1–2 tonnes when they are born, but nourished by their mothers’ milk (humpbacks are mammals, not fish), rich in nutrients and fat, they grow in no time at all. Rapid growth is crucial for young humpbacks as it helps them keep up with their adult kin, which can swim up to 25 km/hour. Humpback whales are wandering animals – they calve in warm equatorial waters and then leave for the polar regions (of both hemispheres), where they forage intensely throughout the summer. Adult individuals may travel up to 25 000 km annually, living on a diet which seems hopelessly inadequate for their size.

Whales follow swarms of krill (crustaceans similar to shrimp) and schools of small fish, which they filter out of ocean water with the use of baleen. Baleen is a filter-feeding system made up of bristles arranged in plates and suspended from the whale’s upper jaw. The baleen of a humpback whale is about 45 cm long at the front of the animal’s mouth and up to 90 cm long on its sides. Humpback whales use the technique known as lunge-feeding. In order to catch its prey, the animal opens its mouth up to almost 90 degrees and the water rushing inside expands the throat pouch so much that the capacity of the whale’s mouth exceeds the normal capacity of its entire body! It’s worth noting that the characteristic spray blown out when a whale comes to the surface has nothing to do with foraging. It is simply forcefully exhaled warm air, which turns into mist upon contact with much colder atmospheric air.

What’s by far the most interesting about humpbacks, however, is their social life. Humpback whales are solitary creatures, which sometimes gather into temporary groups, but every once in a while they form super-groups of as many as 200 individuals! Scientists are still at a loss as to why the animals would do that. One of the theories suggests that, due to their growing numbers, humpbacks gather into groups in particularly food-rich areas to forage together. It is, after all, typical of them to team up and feed cooperatively. They engage in bubble-net feeding (which involves exhaling through blowholes while circling the prey, in other to trap it in a net of bubbles) and stun their prey with low-frequency noises and by slamming their fins against ocean surface.

Humpbacks use their vocalizations for communication purposes. The songs of the males can be heard from a distance of up to 15 000 kilometres! They are made up of elaborate sequences of moans, grunts, shrieks and other complex sounds, and may last from several minutes to several hours. Young individuals, on the other hand, “whisper” to their mothers. Scientists have proven that particular individuals and particular populations have songs characteristic of their region and that, during migration and chance meetings with other “humpback nations”, they learn new sounds and modify their songs.

What are whale songs about? Scientists believe they serve an informative function. Just like wolves’ howling, the songs are territorial anthems or serenades letting others know the location of individuals ready to mate. They may help males attract females or drive away potential rivals. During the breeding season, males follow females and then try to win their favour by performing acrobatic displays. The competition is fierce, with up to a few dozen males courting a single female. Other hypotheses suggest that humpback songs help them navigate in the ocean.

There are more and more records of humpback interactions with killer whales (over a hundred, so far). The latter, despite their relatively small size (adult individuals reach the lengths of about 6–10 m and the weight of 2–9 tonnes), cooperate so well within their family groups (pods) that they can hunt animals as big as humpback calves. The calves, however, are not defenceless. Even though a single mother may not be able to protect its offspring against an attack of killer whales, there are times when it does not have to fight alone. There are documented cases of adult male humpbacks joining in to help the mother protect the calf and actively repelling the attackers. It’s hard to tell whether such behaviour is triggered by sheer altruism or by the instinctive desire to propagate own genes. Humpback whales return to the waters where they were born, so chances are that individuals found in a given area may be related.

What’s even more intriguing is the fact that humpbacks are known to save from killer whales not only fellow humpbacks, but also other whales, seals, sea lions, and even fish. In these cases, gene propagation is clearly not the reason. It is still not clear, however, if the behaviour stems from altruism. Research indicates that humpback whales can hear and recognize killer whale calls. It may be, therefore, that upon hearing killer whale hunting cries, humpbacks rush to the rescue as the prey me be one of their kind. The case of a humpback which saved a seal from killer whales by carrying it on its belly shows that humpbacks know exactly what they’re doing and that the protection they offer smaller animals is not incidental. Many adult humpbacks bear scars which indicate they have first-hand childhood experience of killer whale attacks, so it is possible that they remember these attacks and, to put it mildly, do not count killer whales among their friends.

What’s known for sure about humpbacks is that the females make excellent mothers. While swimming, they touch their calves’ fins in a way which suggests affection and tenderness. Mothers tend to their young for almost a year, feeding them and fending off predators, but the claves need another decade to reach maturity and their ultimate body size. The young fall prey to killer whales and sharks. To make it less likely to happen, the whale mother (cow) and the calf stick together, but a calf cannot hold its breath for as long as an adult individual. While the latter can stay under water for almost three quarters of an hour, for the first months of its life a newborn calf needs to breath every few minutes. For this reason, as shown by research done off the coast of Alaska, mothers whose young cannot keep up with them when diving, spend much less time in ocean depths than their childless cousins. This is true both for the number of dives and the amount of time spent under water. With time, however, as the young whales master the skill of diving, they explore the depths by their mothers’ sides more and more frequently.

Humpbacks are superb swimmers, with their powerful flukes (tail fins) as their driving force. They often breach, landing with a mighty splash. Scientists are not certain if breaching and crashing down into the ocean helps the whales get rid of parasites attached to their skin of it they simply do it for pleasure. Humpbacks are often seen slapping the water with their long pectoral fins or the flukes. Another typical humpback behaviour is the so-called spyhopping, which involves the whale vertically poking its head out of the water and turning around to inspect its surroundings. A behaviour unique to the humpback is leaping clear out of water with its back down, twisting mid-air and crashing down belly first. Less frequently they can be seen flapping their fins as if they were wings. Such displays may last for hours, which explains why humpback whales are favourites with sailors and tourists.

Even though commercial whaling is no longer a threat to the humpback population, they must face new challenges presented by modern economy. Ever larger and faster ships increase the risk of collision. Studies carried out off the coast of Alaska in the years 1978–2011 contain records of 108 collisions of the sort, out of which at least 25 proved fatal to the whale involved. Current research and the activity of marine wildlife protection organisations intend to force the authorities to impose speed limits on vessels navigating in areas where the risk of collision is considered to be the highest. Another threat is industrial fishing and the resulting depletion of krill and fish stocks, which are the staple of humpbacks’ diet. Whales also get entangled in fishing nets, which sometimes ends tragically. What is more, humpback experts increasingly point to the problem of sound pollution and the oceans reverberating with the noise of ship engines and drilling platforms used for oil and gas extraction. This type of anthropogenic noise has a frequency similar to that of the sounds made and heard by the humpbacks. As a result, the noise confuses the whales, making it harder for the animals to navigate and communicate with each other. Research shows, that in areas when marine traffic is especially bad, humpback whales fall silent. It is therefore up to us, if their global underwater concert carries on. 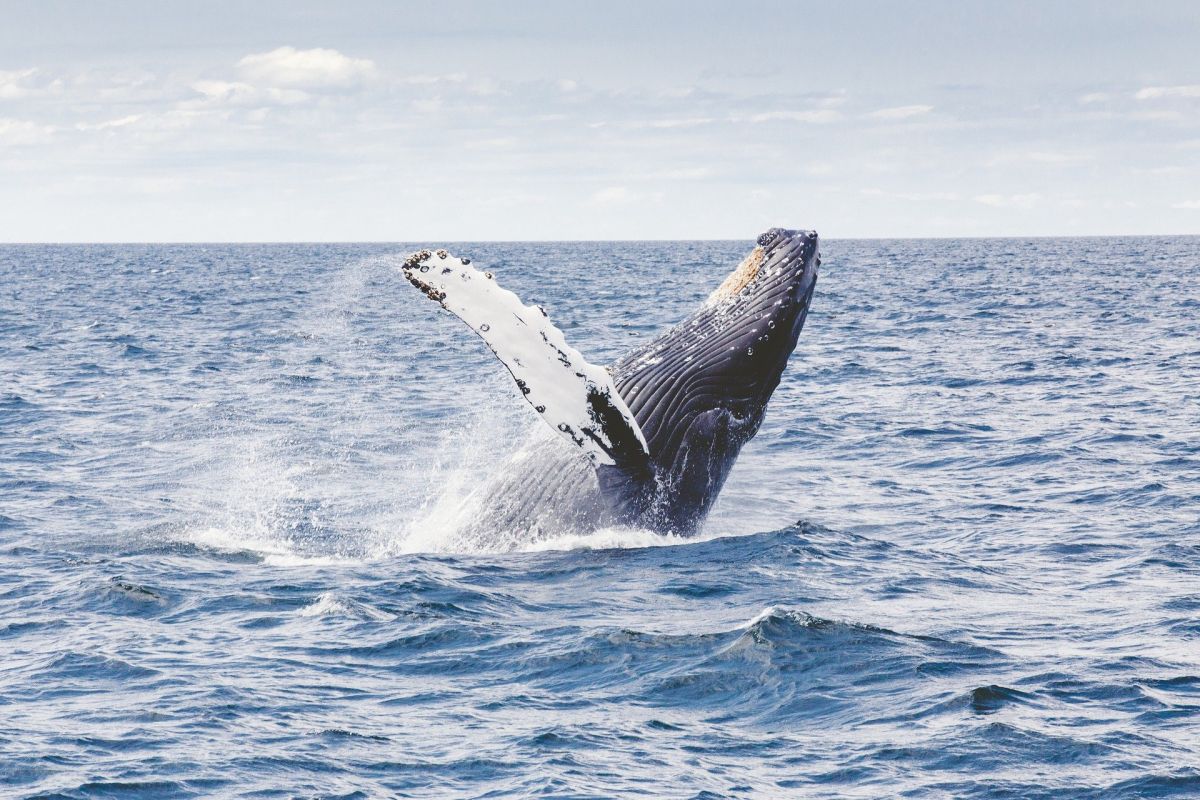 Photo 1: A humpback whale during an acrobatic display (source: Pixabay) 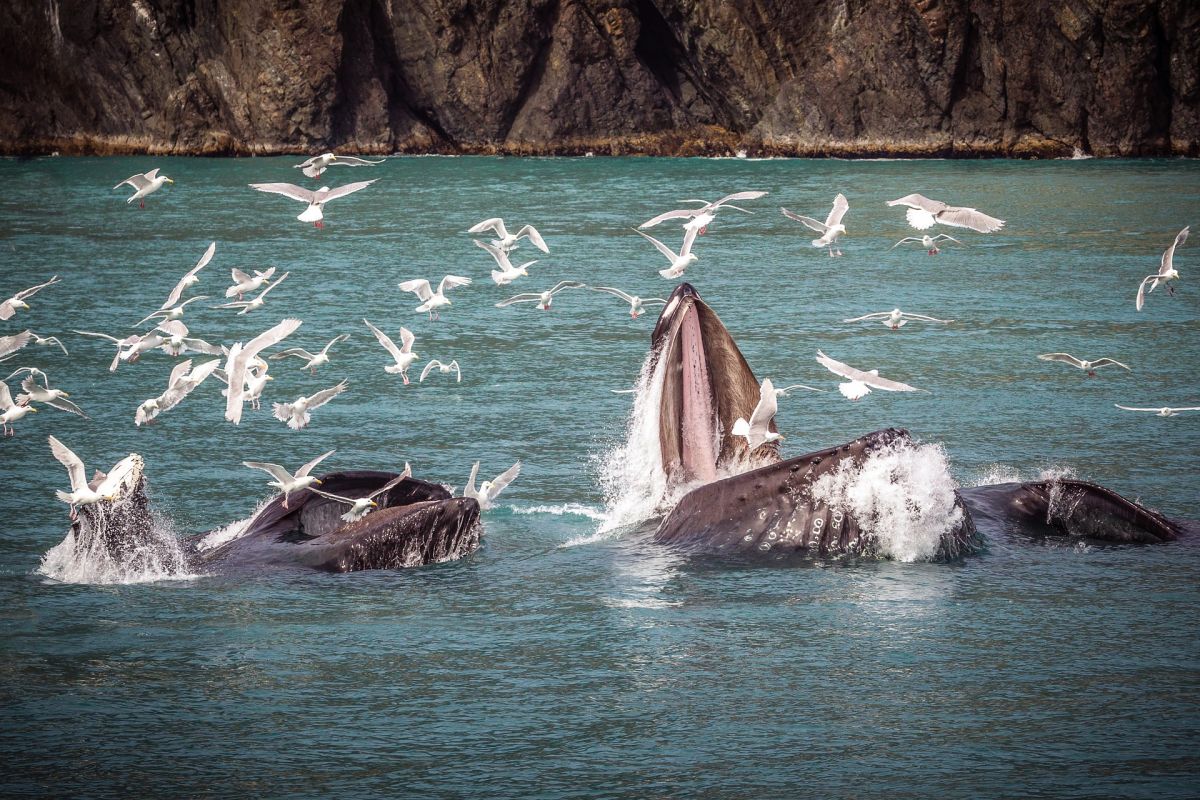