The oases of Antarctica - Edu Arctic

The oases of Antarctica

When we think of an oasis, the first image that comes to mind is usually that of a lush green area amidst the endless sands of a desert, with camels quenching their thirst at a spring and caravan drivers dozing in the shade.

Oases provide refuge from the heat and the sand, neither of which is found in ice-bound Antarctica. Life over there thrives only along the edge of the continent and on the islands scattered in the surrounding seas. Further inland one may come across several research stations, where scientists find much needed shelter during the harsh Antarctic winter. Frigid and hostile as the continent is, its oases can’t possibly resemble those found in Sahara. So what are the oases of Antarctica?

Even though Antarctica and a typical sand desert appear to have little in common, they do in fact share several similarities. These include, most of all, the lack of water and extreme temperatures. Of all the world’s deserts, Antarctica is the largest (Table 1). How can that be? After all, snow and ice are both forms of water. And they’re fresh water, too. Why are we, therefore, comparing Antarctica to Sahara?

Table 1. A list of the world’s largest deserts, including their surface area and type. 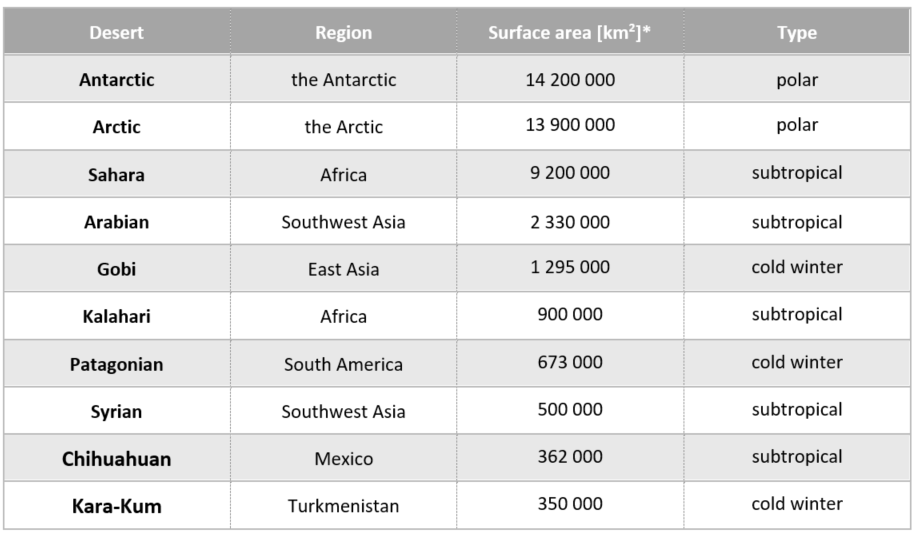 *The above information comes from the CIA website: https://www.cia.gov/the-world-factbook/countries/world/#geography. It is worth noting, however, that the surface area information differs significantly depending on the source. To give one example, according to LiveScience, the Sahara covers 8 600 000 km2, while the area of Chihuahuan is 282 000 km2. The discrepancies are likely to stem from the methods used to determine desert boundaries.

According to a definition, a desert is an area of land within a dry climate region, devoid of vegetation or with low-growing, scattered vegetation covering less than 10% of its surface (Encyklopedia PWN; Migoń et al., 1998/1999). At the same time, it is characterized by very limited precipitation – less than 250 mm per year (Oxford Dictionary of Earth Sciences, 2008).

Let us stop here briefly to explain the above-mentioned precipitation measurement unit. A millimetre of precipitation (rainfall) refers to a layer of water formed after pouring 1 litre of water over a surface area of 1 m2, which – in our case – will be the bottom of a watertight container. If we measure the depth of the layer with a ruler, we should get exactly 1 mm. Such an approach makes it possible to compare the amount of rainfall in different parts of the world. The annual rainfall of 250 mm means that a given area gets 250 litres of water per 1 m2 per year. To give you a better idea of how much (or how little) it is, in Poland the average annual sum of precipitation, as calculated by the Polish Institute of Meteorology and Water Management (IMGW) for the year 2021, was 627.4 mm.

As we can see, a desert is an area with plant cover of less than 10% and very limited rainfall. In Antarctica, 98% of the continent is covered with snow and ice (whose average thickness is 2700 m) and sparse vegetation may only grow in areas which remain seasonally snow- and ice-free. That’s merely 2% of the entire continent! And how much precipitation falls in Antarctica each year? Contrary to popular belief, not a lot. The average annual precipitation totals as little as 150 mm and the majority of it falls over the Antarctic Peninsula and within the coastal zone. Further inland, the ice cap covering the continent reaches the height of almost 4800 m a.s.l., where the air is cold and dry. What we get as a result is the so-called high-pressure weather, with clear skies and virtually no precipitation, be it rain or snow. Near the geographic North Pole, the average annual precipitation is only about 50–100 mm, while at the top of the ice cap it may be even 0 mm per year. In the coastal zone, on the other hand, the annual sum of precipitation may reach 200 mm, while near the Bellingshausen Sea (which stretches along the coast of the Antarctic Peninsula) it amounts to as many as 1000 mm. If precipitation is such a rarity over much of the sixth continent, what led to the formation of Antarctica’s massive ice cap? It’s a good question, but not one to be addressed in this article.

Antarctica (Image 1) is most readily associated with penguins, cold temperatures and ever-present snow and ice (Image 2). And yet, not every bit of the world’s coldest continent is as white as we might expect. There are areas where, during the summer season (which in the southern hemisphere lasts from November until the end of March), much of the snow melts away, revealing Antarctica’s rock surface (Image 3). In most cases, these areas lie within the coastal zone, where they serve as a buffer between the sea and Antarctica’s glaciers. Some, however, can be found further inland, where – surrounded with ice – they form dark islands in the vast ocean of white. Regardless of how big they are, they are made of rock and dotted with freshwater lakes of various sizes, which become ice-free in the summer. It is these areas that are known as Antarctic oases. 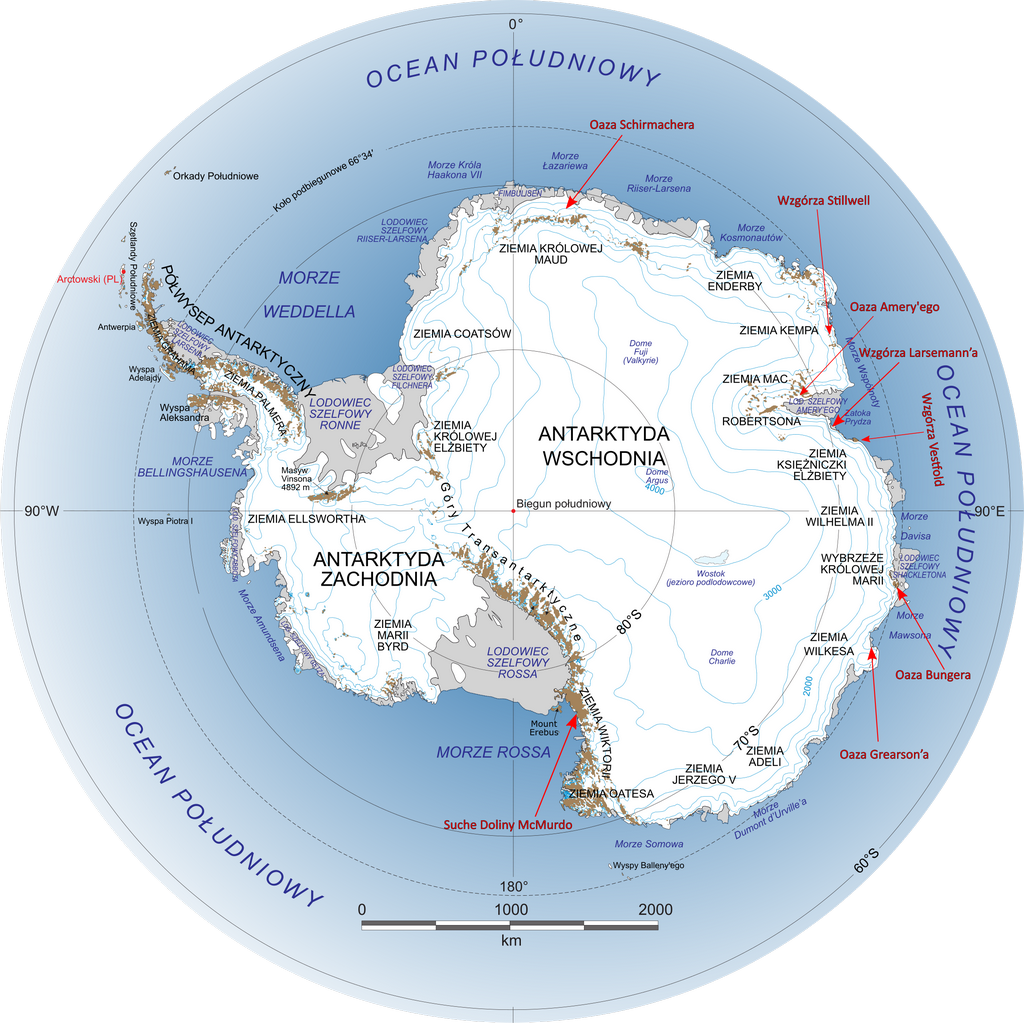 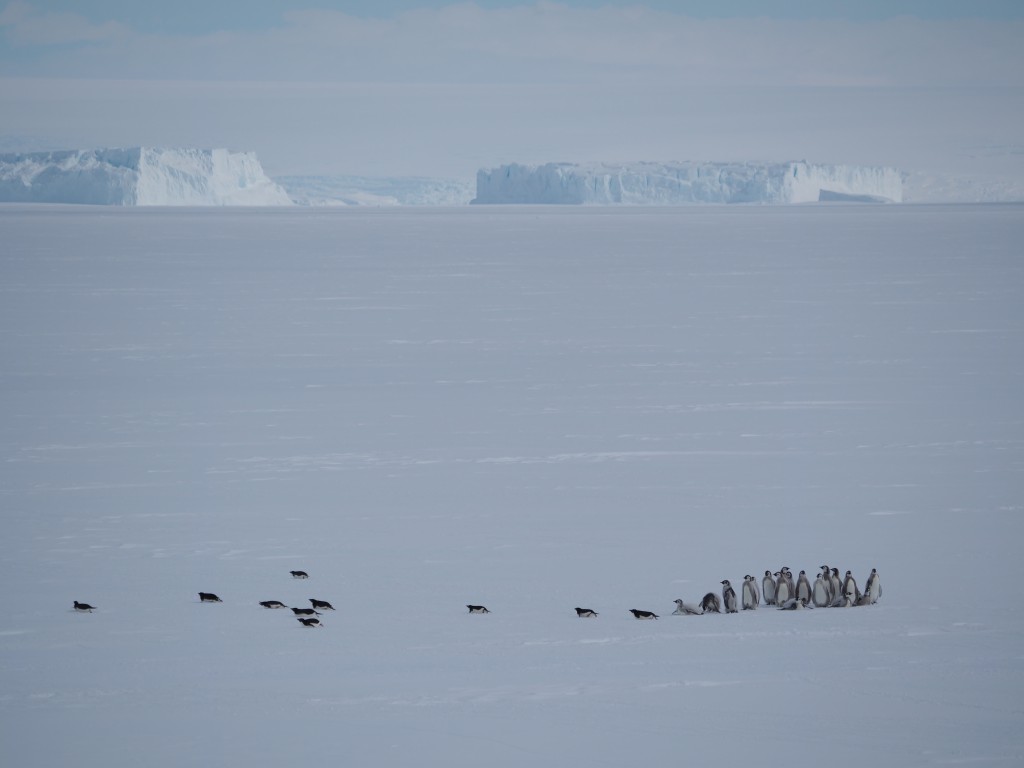 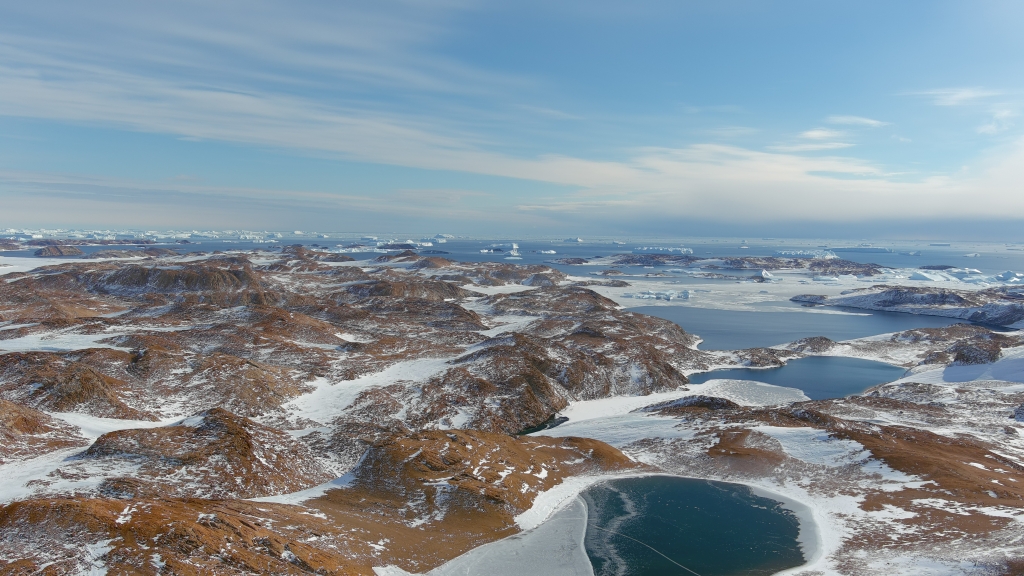 Table 2. The largest oases of Antarctica 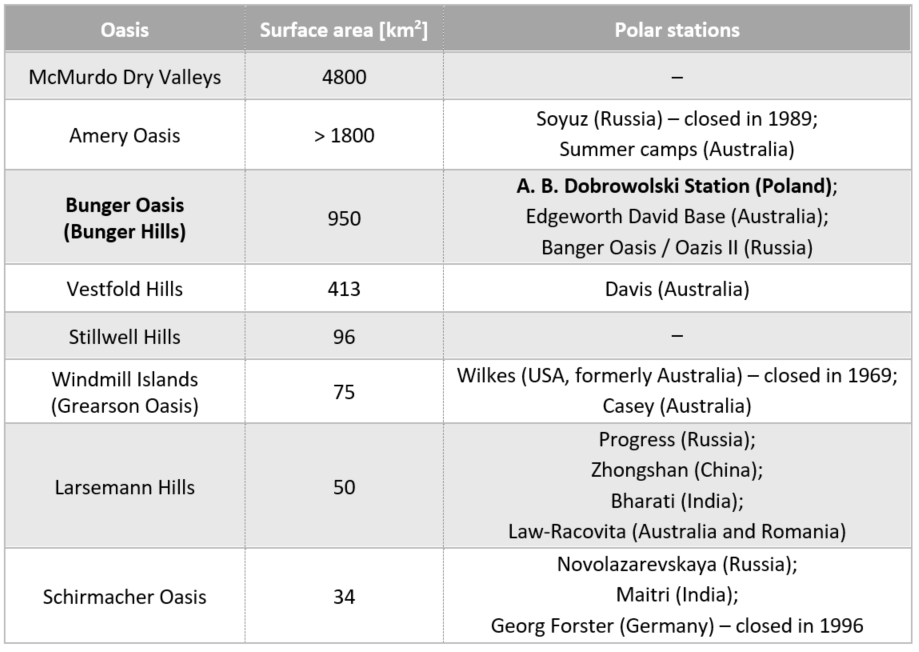 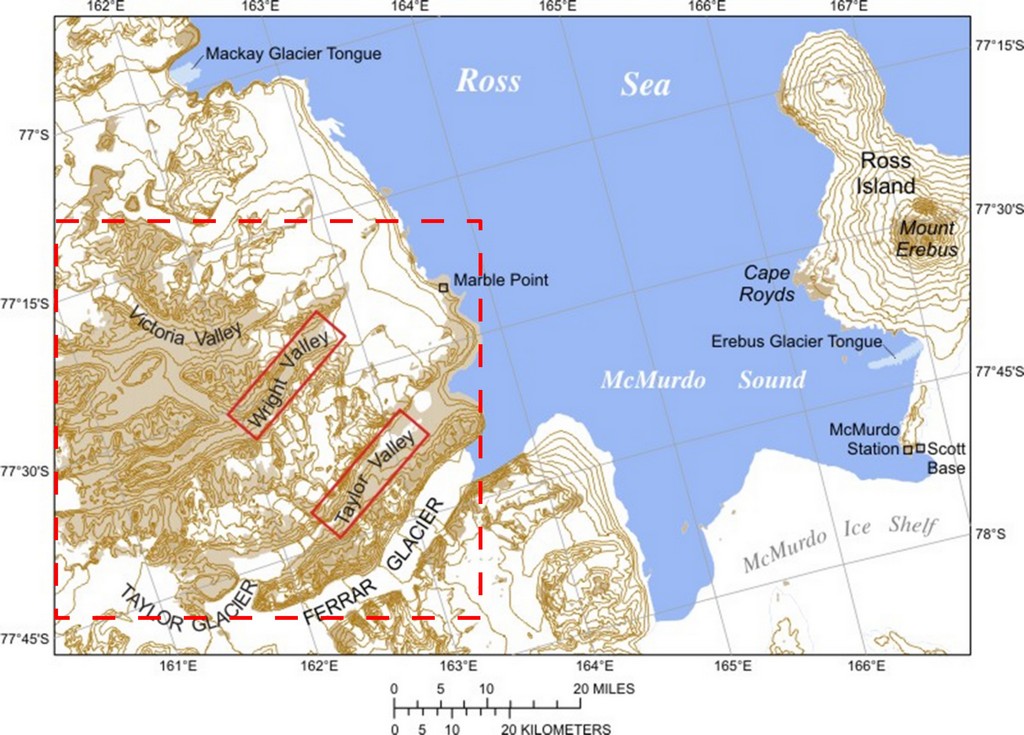 Such unusual areas are rare in Antarctica. The largest known oasis is the McMurdo Dry Valleys, covering 4800 km2! The table above (Table 2) presents eight of the largest oases of Antarctica. A brief glance at the map (Image 1) makes it clear that most of them lie in East Antarctica, which is even more inaccessible than the continent’s western side (lying on the opposite side of the Transantarctic Mountains). These ice-free areas are a great location for research station, which – built on hard rock – are much less likely to vanish under the snow within a few years, as is generally the case with buildings constructed on the ice. Moreover, lakes provide easy access to fresh water, while the lack of a thick ice cover makes it possible to do research in geology, geomorphology, geochemistry and broadly-understood biology.

Like many places in Antarctica, Bunger Hills owe their name to their discoverer, Lieutenant Commander David E. Bunger of the U.S. Navy. In the years 1946–47, Bunger took part in one of the most ambitious reconnaissance operations in Antarctica, known as Operation Highjump, during which he served as a plane commander. While taking aerial photographs, Bunger’s crew – to their utmost surprise – noticed an area of ice-free land dotted with ice-free lakes. The team landed on one of the lakes in February 1947 and the area has been known as the Bunger Oasis, or Bunger Hills, ever since.

A few years later, in 1956, on the banks of Lake Figurnoye (also known as Algae Lake) located within the oasis, the USSR erected a research station, which was given the name Oazis (Image 6). Three years later, in 1959, the station was passed over to Poland, at which point it was renamed the A. B. Dobrowolski Antarctic Research Station. Apart from the Polish station, the Bunger Oasis is home to Banger Oasis Station (also known as Oazis 2), built by the USSR in 1987, and the Australian Edgeworth David Station of 1986. Despite the presence of three research stations, the Bunger Oasis remains empty for much of the year, with no more than several scientists working there in the summer (January–March).

The Bunger Oasis is separated from Mawson Sea with a 50-kilometre-long strip of ice, known as the Shackleton Ice Shelf. In the east, the oasis borders Remenchus Glacier and the Antarctic ice sheet, in the south – Apfel Glacier, and in the west – Apfel, Edisto and Scott Glaciers. Over half of its surface area is taken up by lakes (Image 7). The land is covered with weathered rocks, stones and gravel, forming the so-called ground moraine. This means that the mineral material was left over by retreating glaciers. Even though the hills are relatively low (only 160 m a.s.l.), the landscape is rather varied.

Around 40 000 years ago, the retreat of melting glaciers started to uncover what is now the Bunger Oasis. The process of deglaciation continued for 20 000 years (Gore et al., 2001) and then slowed almost to a stop, as a result of which the shape and size of the area remains virtually unchanged. The lakes located within Bunger Hills are fed by meltwater, or – to use a technical term – proglacial water, from the melting of glacier ice at the edge of the oasis. Not all of them, however, are freshwater lakes. Some are brackish, which means they contain a mix of fresh and saline water, while others are salt lakes, presumably because they stretch under the Shackleton Ice Shelf and connect to Mawson Sea. 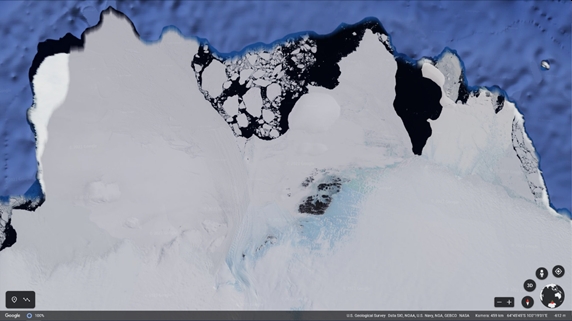 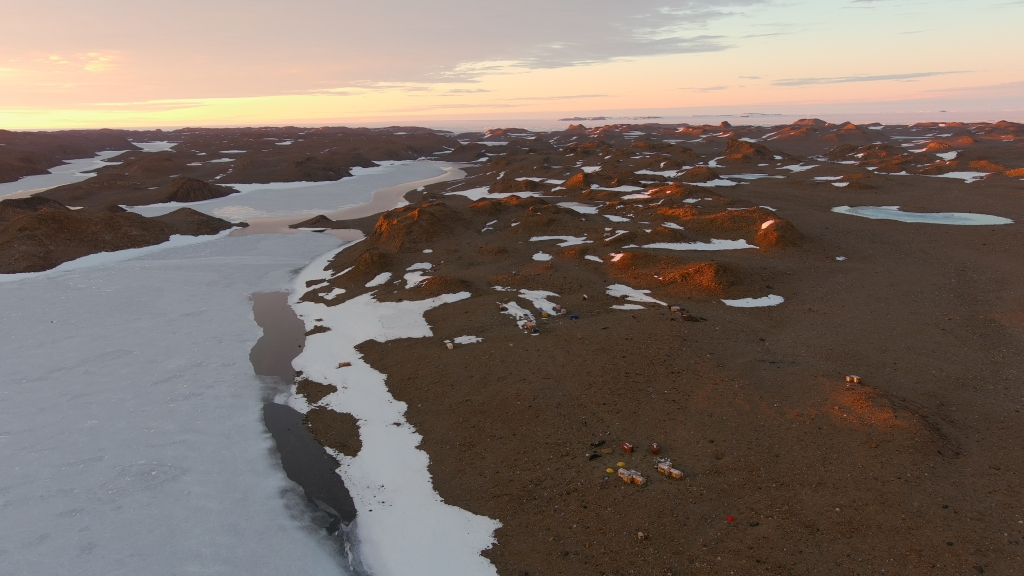 Image 6. Lake Figurnoye and the Bunger Oasis, which is home to the Polish A. B. Dobrowolski Antarctic Station (in the foreground) and the Russian Banger Oasis. Credit: Adam Nawrot

What is also worth mentioning is that the largest freshwater lake in the Bunger Oasis, which is Lake Figurnoye, is at the same time the largest freshwater lake in all of Antarctica. It’s a tectonic, flow-through lake (with ice sheet meltwater flowing in from the east and out in the west), which is 18 km long and up to 1 km wide, covering 14.7 km2. The lake’s most impressive dimension, however, is its depth, which reaches even 137 metres!

Even though in the summer, snow melts in the oasis and liquid fresh water becomes plentiful, it is not enough for flora and fauna to thrive. The average summer temperature is still only a few degrees above zero and although there may occur warm, sunny days with air temperature exceeding 10°C, the area is often subject to fierce, mostly easterly winds (with the maximum recorded wind speed of 56 m/s or over 200 km/h!) and – of course – long, harsh winters, when the temperature may well drop below -40°C. In other words, conditions within the oasis are still nothing short of extreme, as a result of which life is slow to develop. Local vegetation includes mostly algae, mosses, lichens and fungi and the only representatives of vertebrate animals to be found there (only in the summer) are birds such as the snow petrel, Wilson’s snow petrel and south polar skua. On rare occasions, the largest salt lake is visited by the Weddell seal or – even more uncommonly – by an Adélie penguin or two. To get there, penguins must leave their nesting sites and travel many dozen kilometres over inhospitable, crevassed glaciers. Why do they bother? Perhaps, just like us, they have an appetite for adventure. 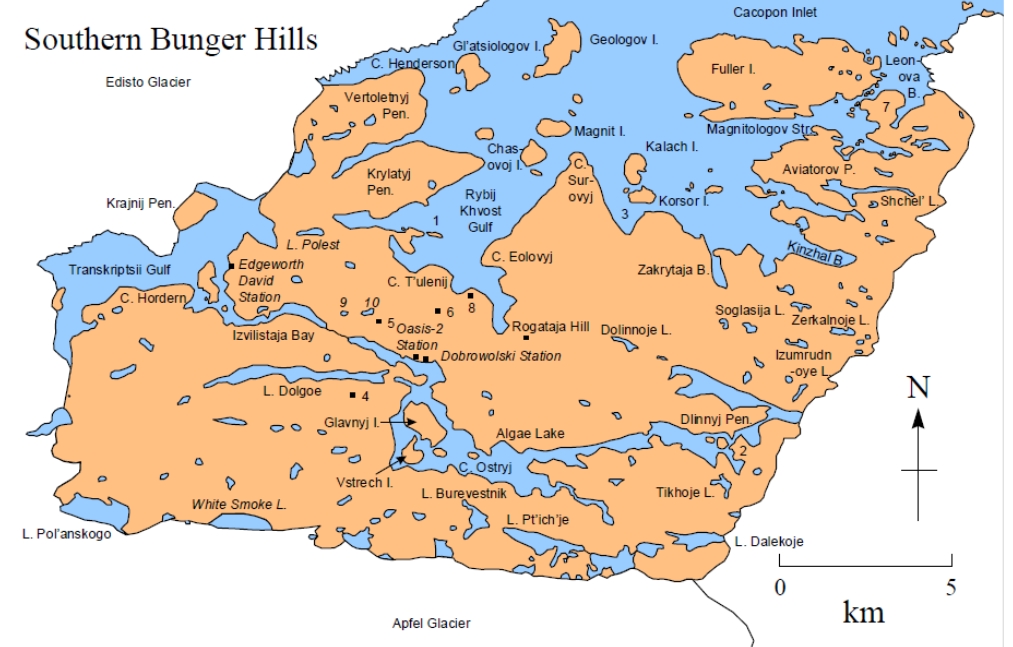 Image 7. The Bunger Oasis. The map includes the names of selected lakes and islands as well as the location of research stations. Source: Gibson, J. A. E., 2000.

The thick, icy crust of the sixth continent still hides many mysteries. The oases, however, provide rare points of access to one of Antarctica’s best-kept secrets – its rock surface. And so, despite the not-quite-idyllic landscapes and harsh conditions, the oases of Antarctica are at least as valuable to science as their desert equivalents were to ancient camel caravans.