Since then, most of Svalbard’s glaciers have lost their protective firn layer, which leaves the ice much more vulnerable to summer melt. The results are published today in Nature Communications.

Svalbard glaciers have a relatively flat surface, and are situated mostly less than 450 metres above sea level. The receding firn line reached that height in the mid-1980s, suddenly leaving much of Svalbard’s surface without its protective firn layer. “That started a period of steady mass loss,” says Brice Noël, first author of the publication. “However, we shouldn’t call it a tipping point yet. Between 2005 and 2012, Svalbard mass loss slowed down considerably, due to some colder summers with average melt. But we have seen steady mass loss again since 2013.”

With an intact firn layer, glaciers are able to handle yearly temperature fluctuations. The firn layer acts as protection for the glaciers in two ways. It currently stores about half of the meltwater that is produced in summer, allowing it to refreeze instead of running off into the sea. In addition, the white firn layer reflects much more sunlight than the darker bare ice underneath. That means glaciers without a firn layer absorb more sunlight, causing them to melt even faster.

The fact that the firn line now fluctuates around the critical height of 450 metres above sea level makes Svalbard glaciers highly vulnerable to further warming. In the warm summer of 2013 no less than about 80% of the glacier area experienced surface mass loss, with meltwater runoff more than doubled compared to previous years. In July 2020 Svalbard again experienced record high temperature. Noël concludes, “If the current warming persists, it will be extremely difficult to avoid further mass loss of Svalbard glaciers in the future.”

The recent death of a 38-year-old man after a polar bear attack on Svalbard has been linked to these rising temperatures. The man, manager of Longyearbyen Camping, was attacked in his tent at night by a polar bear most likely hunting for food. Polar bears have been sighted much more often around Longyearbyen in recent years, likely because the sea ice on which they usually hunt has disappeared, forcing the bears to change their hunting grounds, experts said.

Until the mid-1980s, the mass balance of the Svalbard glaciers (blue line) is stable around a neutral position, but then starts to fall, with a clearly visible pause between 2005 and 2012. Mass loss since the mid-1980s is translated into global sea level rise. 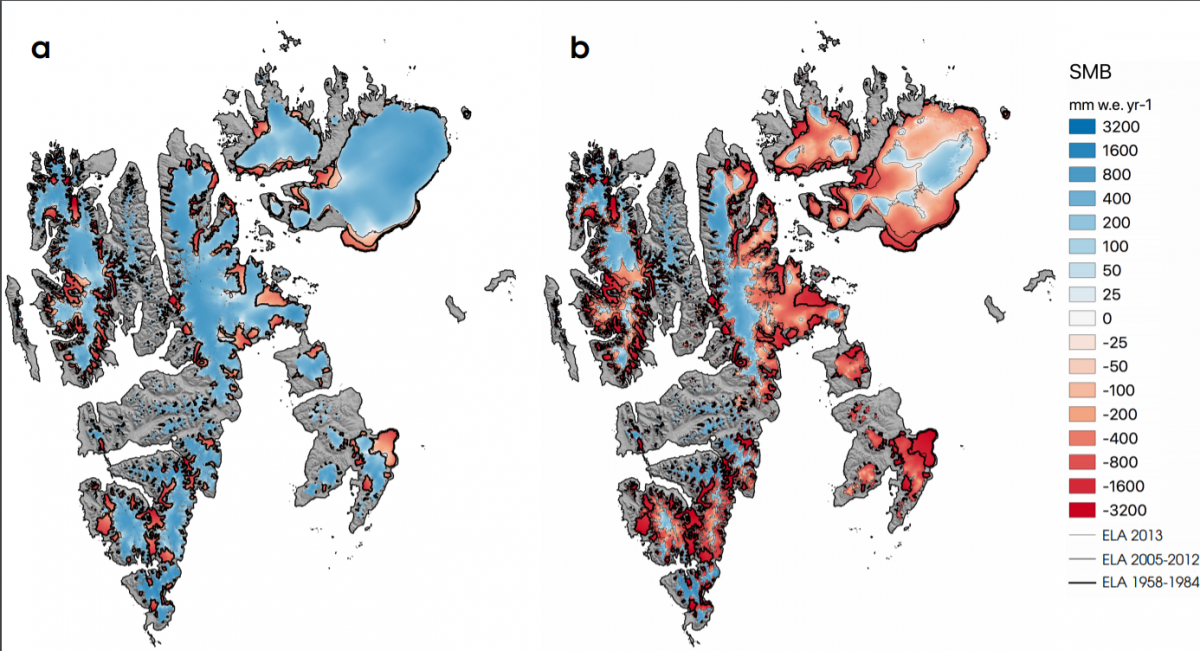 Comparison between the colder period 2005-2012 (left) and 2013 (right). In blue, the protective firn layer covering the glaciers’ accumulation zone; in red, the ablation zone where bare ice is exposed in summer.