A single pole, or how there is more to polar research than glaciers: recreating the globe from billions of years ago - Edu Arctic

A single pole, or how there is more to polar research than glaciers: recreating the globe from billions of years ago

Ancient supercontinents, superminerals and superchallenges are the topic of our discussion with Monika A. Kusiak, the initiator and main investigator of a research project funded under the GRIEG call for proposals, whose execution began on 1 October 2020.

What is the project about, where did the idea come from and has similar research been done before?

The fundamental idea behind the project is to test the hypothesis that the northern part of the Labrador Peninsula, West Greenland and Enderby Land in East Antarctica were once – about 3.6 billion years ago – parts of a single continent. In other words, our aim is to check if in the early Archean Eon there was indeed one continent which included parts of the present-day Arctic and Antarctic. The idea occurred quite by chance. A few years ago an article was published by Allen Nutman, in which he introduces the concept of a single fragment of the Earth’s crust containing elements found in all the above-mentioned areas, despite the current distance between them. Because I am interested in the so-called early Earth, I have long been studying rock from the East Antarctic and Labrador, which is among the oldest on the planet, and the results of my studies do suggest that the areas contain rock of similar age. This is why I decided to test Nutman’s hypothesis, which is not as yet overly popular. We will, therefore, try to correlate the far north with the far south, the Arctic with Antarctica.

Is much known about this incredibly distant past?

The Earth, as most people realize, is 4.5 billion years old. Everyone has heard of Pangaea and Gondwana, but these supercontinents formed a lot later. The idea that another supercontinent existed as early as 3.6 billion years ago is rather bold. The oldest rock on Earth was found in polar regions covered by the project. A bit younger rock was found in Southern Africa and Northern China. Still, we have virtually nothing to shed light on the period known as the Hadean, which covers the first 500 million years since the Earth’s formation. The only “time capsule” is the mineral zircon, which offers clues as to what the Earth’s crust looked like back then. A fragmentary geologic record from the period between 4.0 and 3.0 billion years ago was preserved in just a few spots on Earth and the information regarding the rock’s isotopic and chemical composition makes it possible to draw some conclusions about the crust’s former characteristics.

Most of these places, however, remain unexplored, especially if they are located in what is now polar or subpolar regions. And it is there that the potential for discovering fragments of the Earth’s early crust is the greatest. In the project, we shall use the above-mentioned zircon, or zirconium silicate, which is a brittle, transparent mineral and a common ingredient of igneous, metamorphic and sedimentary rock (such as, respectively, granite, gneiss and sandstone). Zircon remembers the very beginnings of our planet and is highly resistant to weathering and temperature changes.

Apart from the hypothesis about the common geological past shared by fragments of the Antarctic, Greenland and Labrador, we shall also examine a hypothesis on the mechanics of plate tectonics of the period. Was the process similar to what it is now? When did it start? And what did the first crust of our newly-formed Earth look like?

How to check if what now lies at the opposite edges of the planet used to form a single continent?

Our aim, of course, is to check if rock fragments collected in target areas are of the same age, but that is not all we will be checking. We will also examine their geochemical signature (or, in other words, their isotopic fingerprint). It is about the isotopes of uranium, thorium, lead, oxygen, lutetium and hafnium. We will, therefore, engage mainly in geochemical research. There will be some place left, though, for geophysics. The plan is to create paleogeographic reconstructions or – to put it more simply – recreate the globe from billions of years ago. 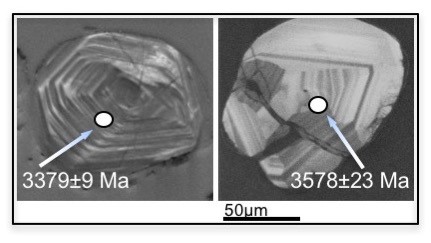 Fig. 1. Zircon grains from Enderby Land (East Antarctica) with the location of spot analyses and age in million years. The image was obtained by means of cathodoluminescence. Contrast differences are caused by differences in uranium (U) content. The grain on the left contains 678 ppm U and the grain on the right 165 ppm U.

What are the greatest challenges of the project?

There are a few, mostly logistical. We will have at our disposal new samples from Labrador and Greenland, but we are not sure if we will manage to obtain new samples from the Antarctic. Luckily, we possess a repository of archive samples and thus have rock material to work on. I do, however, count on our Australian partners and the possibility of making it to Antarctica on board an Australian icebreaker.

The project received funding from the EEA Grants, so it will be executed in partnership with an institution from a Donor State, right?

That’s right. Our partner is Lars Augland, PhD, from the University of Oslo, who is in charge of a geochronology laboratory. Our skills and experience are very different, so the partnership will help us adopt an interdisciplinary approach and complement each other. We also wish to include in the project scientists from Australia and Sweden.

And how can the age of rock be determined?

Regardless of the adopted method, each rock sample must first be crushed to obtain a preparation of a given material. The samples are analyzed under an optical microscope and then under an electron microscope, which makes it possible to determine chemical composition of minerals. To perform isotope analyses we use mass spectrometry. We can analyse an entire grain of a mineral, or just a fragment. The plan is to study different isotopes found in particular minerals, but also many different minerals. By doing so, we will gather comprehensive information on the processes they have undergone. Apart from zircon, we will deal with other accessory minerals, such as phosphates (monazite and apatite) or baddeleyite (a rare zirconium oxide mineral), which we expect to find in mafic dikes (igneous intrusions cutting across layers of older rock). Dike analyses will be used for paleomagnetic studies. The paleomagnetic method is based on the fact that rock becomes permanently magnetized, parallel to the Earth’s magnetic field, when it coalesces or settles out of a fluid. This magnetization provides evidence as to the original geographical position of the place in which the rock – in our case, a dike – formed. The person responsible for the paleomagnetic part of the project will be Professor Marek Lewandowski.

The project involves a range of field work. What is it going to be like?

Conducting field work in such remote and inaccessible areas is challenging mainly from the point of view of logistics and organization. The best time to go to Greenland is June and July, to Labrador – the summer, and to the Antarctic – December and January. To be able to collect rock samples, we must obtain appropriate permits. Additionally, field work in Labrador must involve cooperation with indigenous people – the Inuit take care of us in the field, operate boats, etc. It is crucial not to disrupt archaeological and burial sites, and to document all artefacts that we come across, such as quartz tools, which are surprisingly common. In the south we will be part of an international expedition and collecting samples is likely to be tough because the rock is permanently covered in ice and the time to do the work will be limited by, for example, the availability of the helicopter. These complications, however, are all part of the adventure, of our attempt to unlock at least a fraction of the great mystery that cloaks the Earth’s most distant past.

The GRIEG call for proposals, announced by the National Science Centre (NCN) under the EEA and Norway Grants, attracted considerable attention. As a result, competition was fierce. Out of 305 submitted proposals as few as 28 received funding, only 12 of which dealt with Exact and Technical Sciences. We are, therefore, all the more pleased that found among them is a polar research project of the Institute of Geophysics PAS, which will cost almost 5 million PLN to implement.