Life in the glacial soup

Limited accessibility, unfavourable conditions and high seasonal variability are some of the reasons why the Arctic has not yet been thoroughly studied. At the same time, the region warms up at about twice the average global rate and is now one of the most dynamically changing parts of the world. One of the consequences of climate warming in the Arctic is the release of freshwater from melting glaciers. Formed as a result of gradual accumulation of snow on land, glaciers count among the most spectacular indicators of climate change. Every summer, the melting process accelerates and the surface area of the world’s glaciers shrinks further and further, causing serious concern both within and outside scientific circles.

The ongoing disappearance of sea ice (or a layer of frozen seawater) in the Arctic Ocean means that sunlight can now reach the waters which were dark for thousands of years. As a result, the abundance of phytoplankton is rapidly increasing, making the ocean a lot more productive. An opposite phenomenon – the so-called darkening – may occur in the Arctic’s coastal areas, as streams of freshwater coming down from melting glaciers carry large amounts of particles washed off the land. This leads to the formation of dirty „brown zones” in the fiords (glacier-cut valleys flooded by the sea). From above, the “brown zones” look like flowing mud streams, whose shape changes depending on the intensity of glacier melting, wind direction or tidal activity (sea level fluctuations caused by the Earth’s interaction with the Moon and the Sun) (Figure 1). It is only, however, with the use of underwater cameras that we can fully appreciate how dynamic the phenomenon really is and how radically it may affect marine organisms drifting passively in the water column.

The amount of light within the „brown zones” is limited and the darkening effect is caused mainly by mineral particles, also referred to as inorganic sediments, which give the water a characteristic milky lustre. During the summer, when the melting process is at its most intense, the concentration of particles becomes so high that the seawater in the fiords looks much like thick soup. Apart from mineral particles, found in the soup are organic sediments (such as dead organic matter, known as detritus) and organisms passively drifting in the water column (plankton), while the soup’s rich brown, yellow or green colour comes from the particles dissolved in the water.

The inflow of freshwater, intense mixing near the glacier front and the activity of living organisms mean that the ingredients of the glacial soup undergo various transformations. They gather, for instance, into larger formations, known as aggregations, which fall to the bottom like snowflakes (and are thus referred to as marine snow). The process, which may be seen as a way of sediment removal, may also be generated by the trapping of particles in the mucus secreted by phytoplankton colonies. Zooplankton, on the other hand, affects the structure of marine snow by ingesting small particles and excreting larger ones, as well as by moulting. This means that marine snow consists of particles of various size and origin (living or dead, organic or inorganic), often coated in mucus. Particle aggregations are very delicate and fall apart during sample collection. As a result, the only way to thoroughly investigate them is with the use of underwater cameras (Figure 2). 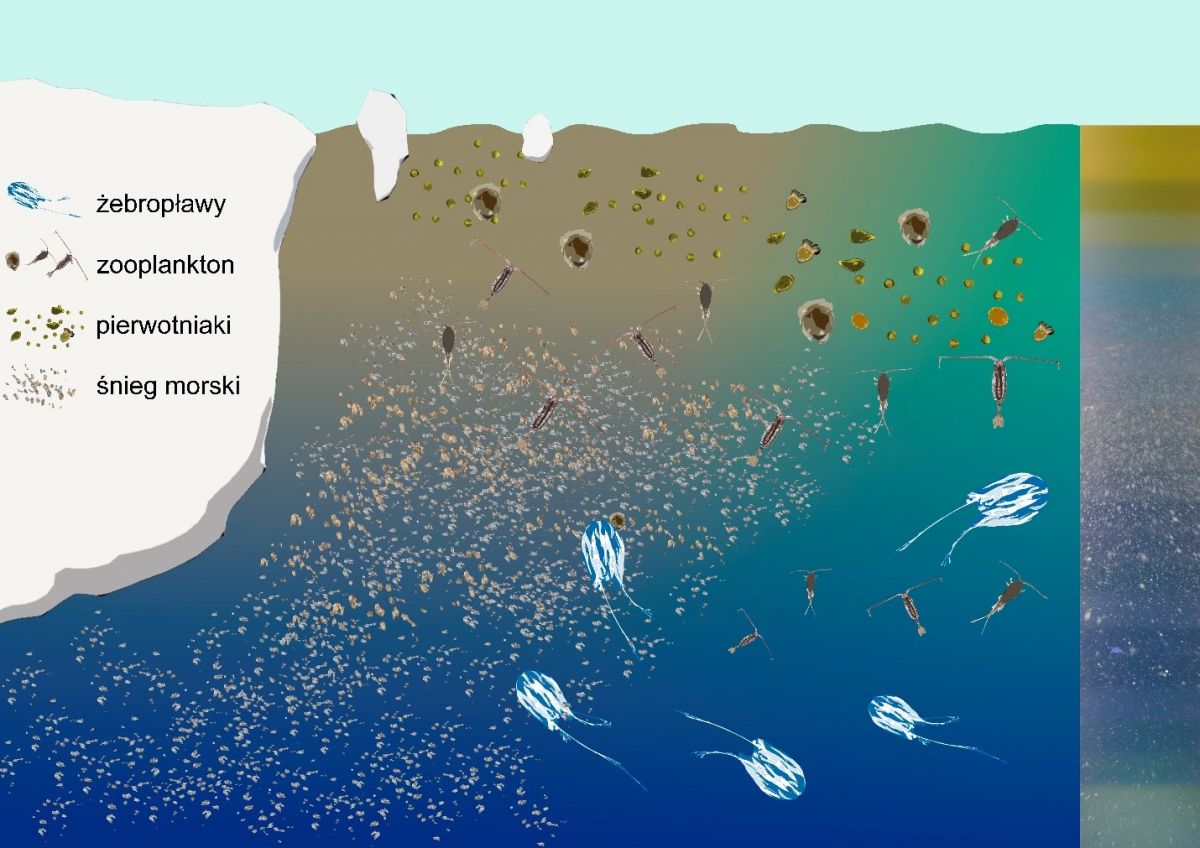 I SEE A DARKNESS

In the summertime, when the Arctic is teeming with life, the melting of glaciers is at its peak. During this period, surviving in the thick glacial soup becomes a challenge for many organisms. In areas with sufficient amount of sunlight and key nutrients, phytoplankton convert carbon dioxide and water into organic compounds in the process of photosynthesis. The process provides the energy that feeds consecutive links of the polar food chain. The “brown zones”, however, where the concentration of particles is high, stop the sunlight from reaching deeper into the sea and thus make photosynthesis a lot more problematic. This means that autotrophic organisms gather close to the surface and many protozoa are forced to resort to heterotrophism. This ability to switch between different trophic modes is why they’re called mixotrophs. Zooplankton is also able to thrive on various kinds of food. Copepods of the genus Calanus spp., which are a key component of Arctic trophic webs, are no longer considered exclusively herbivorous. Depending on food availability, they may feed on ciliates, dinoflagellates or even their own larvae. They can also make use of detritus and mineral particles. Not all organisms, however, are able to adapt to such conditions. Fish, which are to some extent visual feeders, prefer waters further from glacier fronts, where the ratio of living organisms to dead matter is higher and where light conditions are more favourable (Figure 2). On the other hand, water darkening in the fiords may attract deep-sea organisms such as the helmet jellyfish (Periphylla periphylla), also known as the Princess of Darkness. It is, therefore, reasonable to expect that the Arctic fiords will become more densely populated by cnidarians and ctenophores, which are jelly-like zooplankton of low nutritional value for marine predators.

Despite limited primary production, „brown zones” near the fronts of tidewater glaciers (or glaciers that flow into the sea) are foraging hotspots for many marine mammals and birds. Animals that feed there tend to have their stomachs full of large zooplankton, fish and fish larvae. It is likely that the waters near glacier fronts are rich in nutrients due to the rising plumes of freshwater that lift dead plankton and fish towards the surface. But these generous buffets are highly seasonal. In autumn and winter, when rivers freeze and glacier discharge ceases, “brown zones” vanish only to form again the following summer (Figure 3). 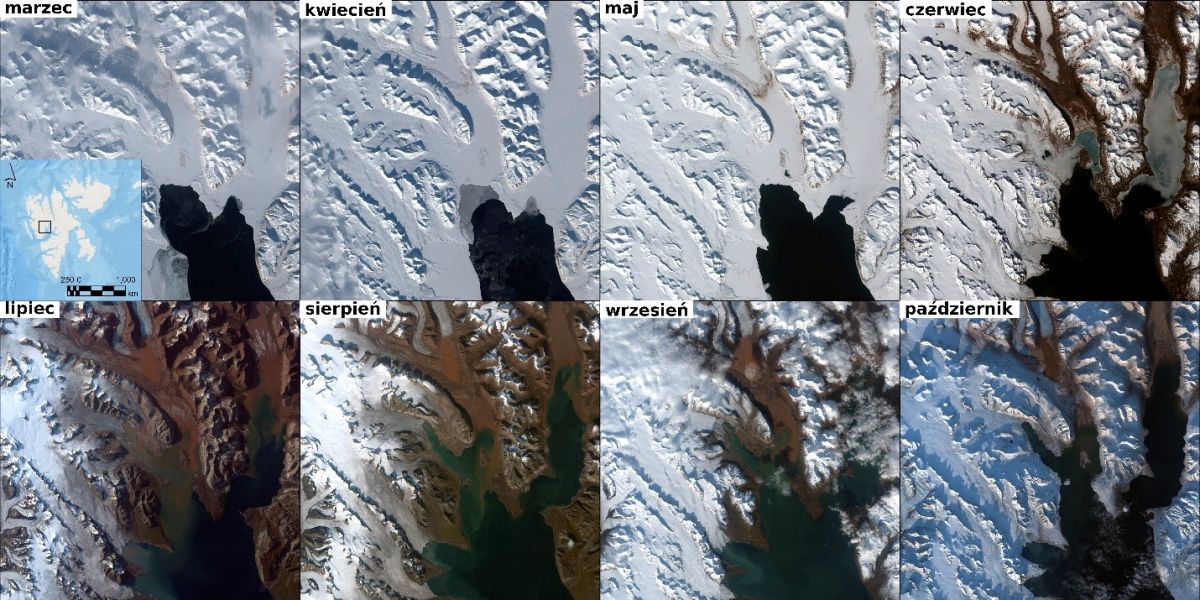 Figure 3. Seasonal variability (March–October 2019) in the extent of sea ice, freshwater discharge from glaciers and rivers and the presence of “brown zones” in Isfiord, Svalbard. Source of satellite images: https://glovis.usgs.gov/app, adapter by the author using ArcGIS Pro 2.5

Apart from the natural seasonal variability, the Arctic is now facing more permanent changes caused by the glaciers’ individual susceptibility to climate warming. Tidewater glaciers retreat and turn into land glaciers, which feed rivers flowing into the fiords. Freshwater from the rivers spills on top of seawater and – having lower density – mixes with it only partially. This affects water circulation within the fiords and reduces the inflow of biogenic substances, which are among the key factors determining life conditions in the glacial soup.

And although the outcomes of the ongoing transformation of the marine environment are still far from clear and so is the future of plankton inhabiting local fiords, there is no doubt the above-mentioned processes will soon have a profound effect on life in the Arctic. So far, studies suggest that the Arctic plankton do not mind living in muddy waters. Still, despite their high adaptability to the changing environment, the time will probably come when they reach their adaptive limits. All we can do is to follow their fate and keep our fingers crossed for their continued well-being.