Glaciers are speaking to us. All we need is to listen - Edu Arctic

Glaciers are speaking to us. All we need is to listen

The melting of glaciers and the massive ice caps of Greenland and the Antarctic is responsible for about 60% of the rise in sea level.

The melt rate keeps accelerating, causing widespread concern among scientists and the millions of people inhabiting coastal areas, who – in the coming decades – will no doubt be forced to relocate. In order to reliably predict the fate of glaciers and ice caps, we must keep close tabs on them by continuously monitoring the rate of ice loss, a task which is far from easy, especially in the case of tidewater glaciers.

Glaciers which terminate in the ocean are, in fact, nothing else but rivers of ice flowing at the speed ranging from a few hundred metres to many kilometres a year. They do so under their own weight and their fronts form enormous ice cliffs. Responsible for their shrinking are three major processes. The first (and the most obvious) is surface melting, whose rate depends on air temperature and solar radiation. The second process responsible for glacier ice loss is calving, which is the spectacular breaking of ice chunks, often as large as multi-storey buildings, off a glacier’s face. And the final process is the melting of the underwater part of the glacier in contact with warmer liquid water.

The processes of glacier calving and underwater melting are very hard, if not impossible, to observe with the use of traditional methods. Satellite images, for example, are usually taken only once in a few days and they show nothing of what goes on under the surface of the ocean. And approaching a calving glacier to take direct measurements sounds like a suicide mission. Luckily, however, it turns out that the shrinking of tidewater glaciers can be studied by listening to underwater sounds.

If we lower a hydrophone, or an underwater microphone, into the water near a glacier or a drifting iceberg, we’ll hear a sound much like the sizzle of a slice of bacon on a frying pan [ ]. Not quite what you’d expect to hear underwater, is it? So where does the sound come from and what does it have to do with glaciers? To answer this question, we must first take a few steps back and have a quick look at the process of glacier formation.

Every glacier “feeds” on snow. Falling snowflakes form a powdery blanket, full of tiny air pockets. As the snow blanket becomes increasingly thicker, the pressure on its bottom layers grows, turning the snow into ice with countless air bubbles trapped inside it. 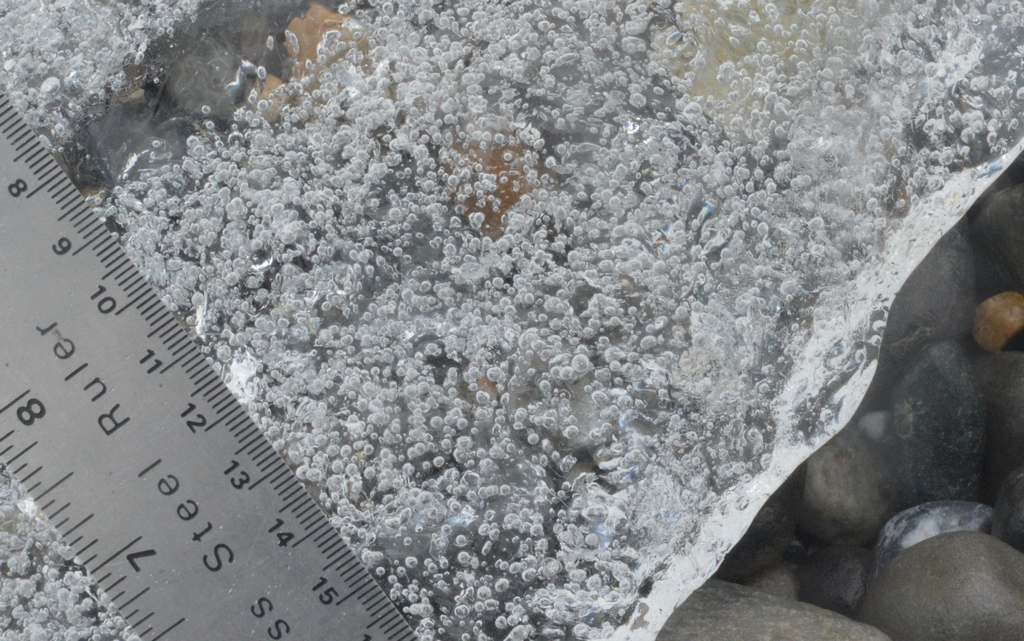 Typically, the pressure of the air in the bubbles is five times higher than the atmospheric pressure and in some cases it may be even 20 times higher (which is the kind of pressure we get at the depth of 200 m below the surface of the ocean). When glacier ice containing air bubbles reaches the sea, a true spectacle unfolds. The melting of the underwater part of the ice cliff causes the release of the air trapped in the ice into the water. Because of the large pressure difference, the process is quite violent and resembles a volley of mini-explosions. With millions of air bubbles entering the ocean, glacier bays are one of the noisiest underwater environments on the planet. But what does the “air bubble cannonade” has to do with glacier studies?

If we assume that air bubbles trapped in the ice are distributed more or less evenly, the amount of air released in a given period of time must correlate with the rate of underwater glacier melting. To simplify, we may say that the noise level is determined by the amount of melted ice. Before we draw a link between the process of glacier melting and the underwater noise of air bubbles, we must, however, learn a bit more about the sound’s characteristics. This is why we study its frequency. It turns out that, both in the Arctic and the Antarctic, the underwater sizzle of air released from glacier ice has a typical frequency of 1 to 3 kHz (which means between 1000 and 3000 cycles, or vibrations, per second). Knowing this, we are able to distinguish the sound of glacier melting from other sounds, such as those made by marine mammals, rainfall, waves breaking against the shore or… glacier calving.

The breaking of enormous ice chunks off the edge of a glacier is one of the most magnificent phenomena occurring in polar regions. It’s a natural process, but its intensity rises in response to the warming climate. The underwater noise made by the ice chunks crashing into the ocean is deafening [ ]. After all, they may well be millions of kilograms in weight (which becomes even more impressive when we realize a typical car weighs “only” about 1000 to 1500 kilograms). Compared to the sound of underwater melting, the noise made by calving has a lot lower frequency and lasts much shorter. Providing the water temperature is high enough, glacier ice melts continuously, whereas calving occurs irregularly, with its exact timing being very hard to predict.

Is it possible to measure the size of icebergs breaking off a glacier by analyzing underwater sounds? As it turns out, it is. Increased ice loss due to calving generates increased noise. It was demonstrated by comparing time-lapse photographs of a glacier’s front with the records or underwater noise for the Hans Glacier, which is a tidewater glacier located near the Polish Polar Station Hornsund in Spitsbergen. The link seems obvious, but in science it is necessary to determine the precise amount of ice corresponding to a given level of noise. In other words, it is necessary to learn the language of glaciers. Without the skill, we are unable to figure out their cryptic messages. But what does it actually take to record the sounds of glaciers and how to do it for long periods of time in harsh polar conditions? 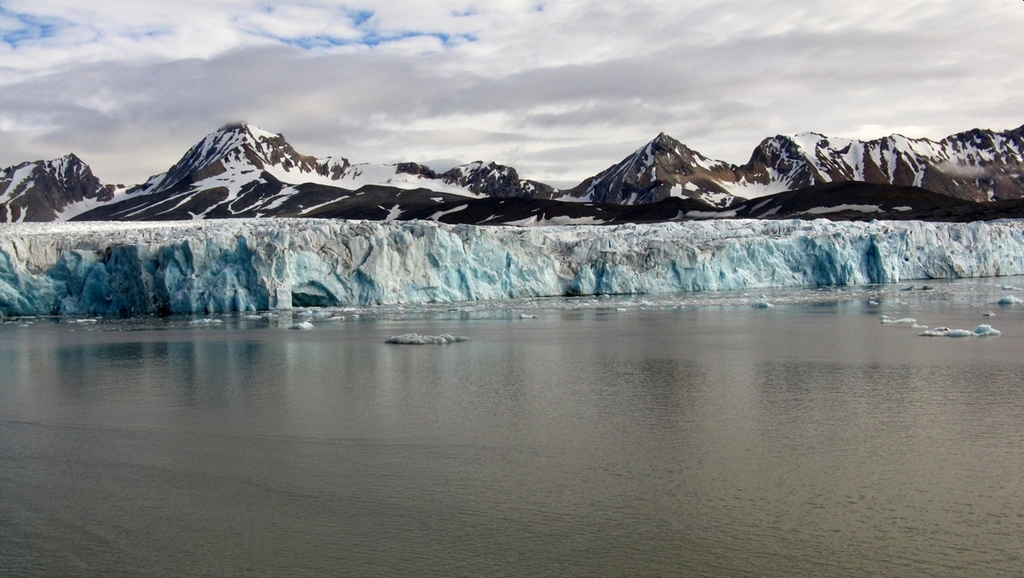 Let’s imagine we’re in a small rubber boat near the Polish Polar Station Hornsund. At our feet lies a long tube with an underwater microphone protruding out of it. The device is powered by several dozen large, cylindrical batteries, like those used for remote control toy cars. Inside it are also memory cards and a small computer, whose task is to record sounds detected by the hydrophone. Thus equipped, we set off on a mission. We manoeuvre among chunks of glacier ice, which must have recently broken off the glacier’s front and drifted away. It takes nearly an hour to reach our destination. The wind and waves toss the boat around, it’s cold and humid. We attach a small anchor to one end of our tube and to the other – an air-filled float, which will prevent the hydrophone from getting buried in the bottom sediment. We carefully let the whole set sink in the water. If everything goes as planned, we’ll be back in a year to retrieve the recordings. This can be done in two ways. If it’s not too deep, we can put on dry suits and dive in the frigid water to bring our equipment back up. Otherwise, we can make use of the so-called acoustic release units, which make it possible to send a special signal to a device attached between the tube and the anchor. After receiving the signal, the tube detaches from the anchor, at which point the buoyancy of the float lifts it back to the surface. Unless, of course, things do not go as planned and our equipment is crashed by a drifting iceberg (only about 10% of which is visible above the waterline) or, despite working perfectly well back home, the device breaks down in Arctic conditions. The risk of failure is high, but so are the stakes we play for, so we take the risk.

Underwater acoustics give us a whole new perspective on the melting of glaciers, a perspective which holds a scientific as well as an aesthetic value. Listening to underwater sounds generated by glacier melting and calving helps breach the gap between our local world and the faraway polar regions. As a result, we find it easier to understand the consequences of climate change. And so, to paraphrase the famous line by Polish poet Jan Twardowski, let us hurry to listen to glaciers – they vanish so fast.