Does size matter? Or mega-problems with macro- and microplastics - Edu Arctic

Does size matter? Or mega-problems with macro- and microplastics

They’re everywhere. From carpets beneath our feet, through contact lenses in our eyes, to planes above our heads.

Synthetic materials, although synthetic, have become perfectly natural, and the growing piles of plastic waste are just another element of our world. But discarded plastic accumulates not only in areas with thousands of people coming and going day in, day out. There’s more and more of it even in the most remote places, where direct human impact is virtually non-existent. And so, if strolling along litter-strewn European beaches you ever console yourself with the thought of the far north – the last stronghold of wilderness, where the coast does not yet resemble a rubbish dump – you’re in for a serious disappointment. The Arctic is also drowning in plastic. 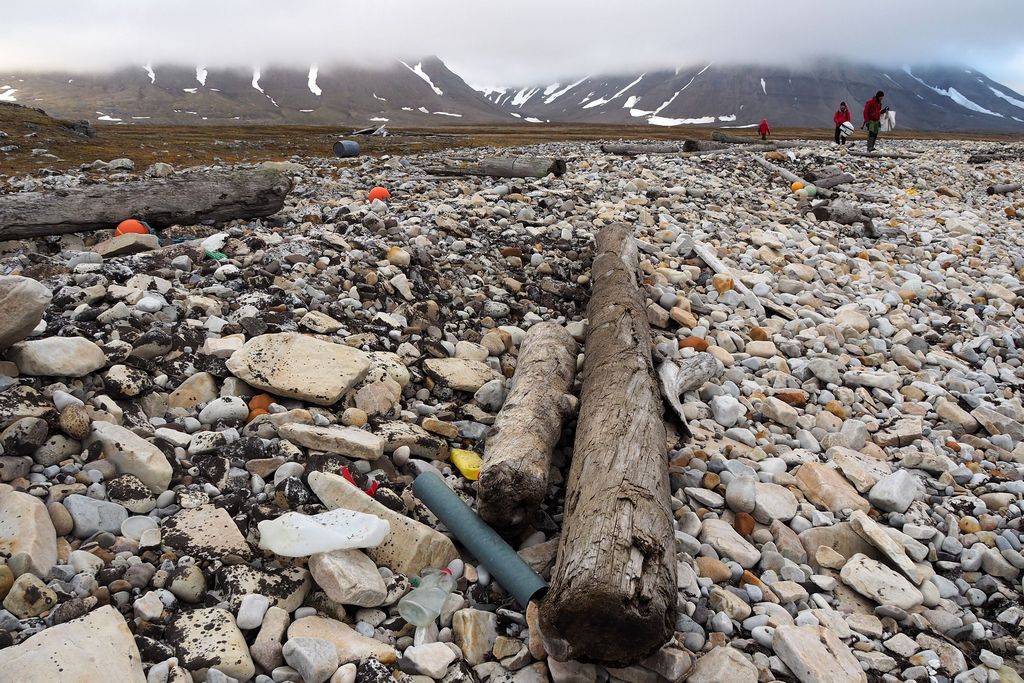 Despite popular belief, the level of plastic pollution in the Arctic is not significantly lower than in much more populated and urbanized areas at lower latitudes. © Barbara Jóźwiak (from the archive of Fundacja forScience)

The statistics are alarming. The chemical industry, which deals among others with the production of synthetic materials, is developing at such a rate that it is currently the second largest manufacturing industry in the world. In the years 2000–2015, plastic production alone rose by almost 80% and the growth rate shows no signs of slowing. Increased production of plastic means increased production of plastic waste, and this will no doubt impact the amount of plastic entering the world’s seas and oceans. According to a report published last autumn by the United Nations Environment Programme (UNEP), even now that’s a least 9 million tonnes a year and it’s not unreasonable to expect that the number will triple within the next two decades. To make matters even worse, this is the most conservative projection of those included in the report. Under a somewhat less optimistic scenario, by the year 2030 the amount of plastic waste entering aquatic ecosystems on an annual basis will have exceeded a staggering 53 million tonnes!

It’s worth keeping in mind, however, that the term “plastic” does not denote a single material, but an extensive menu of chemical cocktails. Believe it or not, but various types of synthetic materials contain in total over 10 000 chemicals (responsible for a given material’s specific qualities), most of which are not found in nature, and new substances are manufactured at a pace which far outstrips the capacity to assess and monitor their impact on the environment. Scientists watch helplessly while producers, excusing themselves with the lack of conclusive evidence that there’s anything wrong with what they do, go crazy concocting ever new chemicals with ever new applications. As a result, chemical content is seldom considered in discussions regarding plastic pollution, with plastic waste fragments being usually grouped by size instead. And so, in the growing plastic mess scientists distinguish megaplastics, macroplastics, mesoplastics, microplastics and nanoplastics. But as they’re yet to reach consensus on the actual sizes associated with each of these categories, more commonly used is a simplified classification – into macro- and microplastics only. 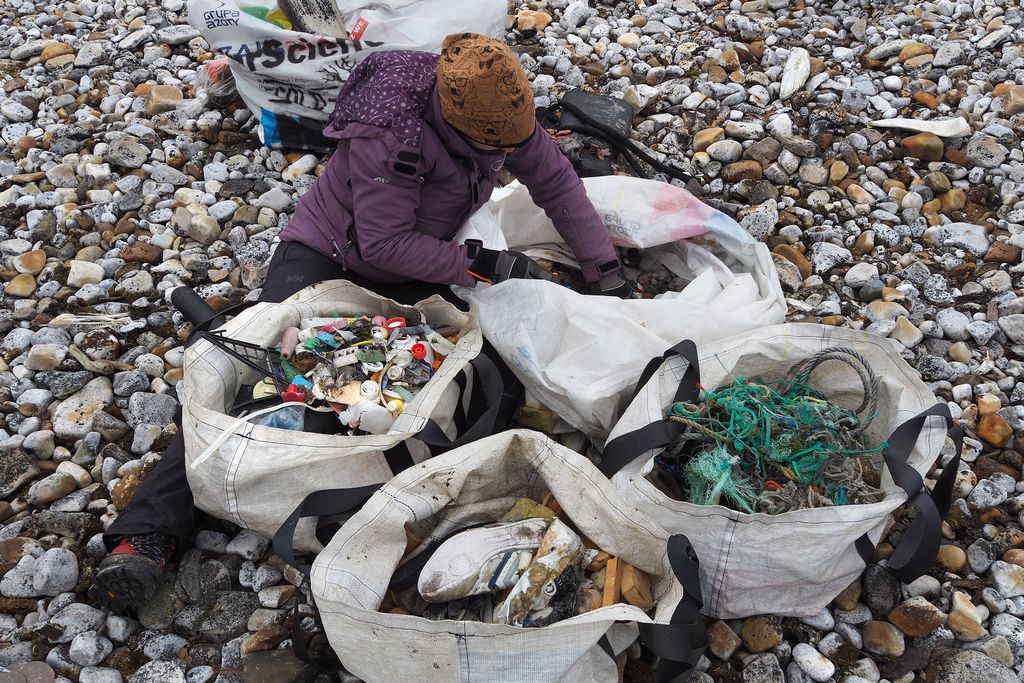 Larger and smaller examples of macroplastics collected on the beaches of Svalbard as part of Sørkapp Marine Litter Cleanup project, carried out in the years 2019–2021 by Fundacja forScience. © Barbara Jóźwiak (from the archive of Fundacja forScience)

Macroplastics, which are common plastic waste items and their fragments, are something most of us are no longer bothered about. Scientists don’t find them too interesting either. After all, a piece of plastic macrolitter is a piece of plastic macrolitter. Even a child knows that. Microplastics, on the other hand, are a whole different story. They excite, stir up controversy, make the headlines. So let us look at what they are, where they come from and why they enjoy the status of environmental celebrities.

According to the National Oceanic and Atmospheric Administration (NOAA), microplastics are plastic particles less than 5 mm in size. To get a better idea, think of a lentil seed. As reported by experts, in the mid-2010s the world’s seas and oceans contained up to 51 trillion of them, which is roughly 500 times the number of stars in our galaxy! 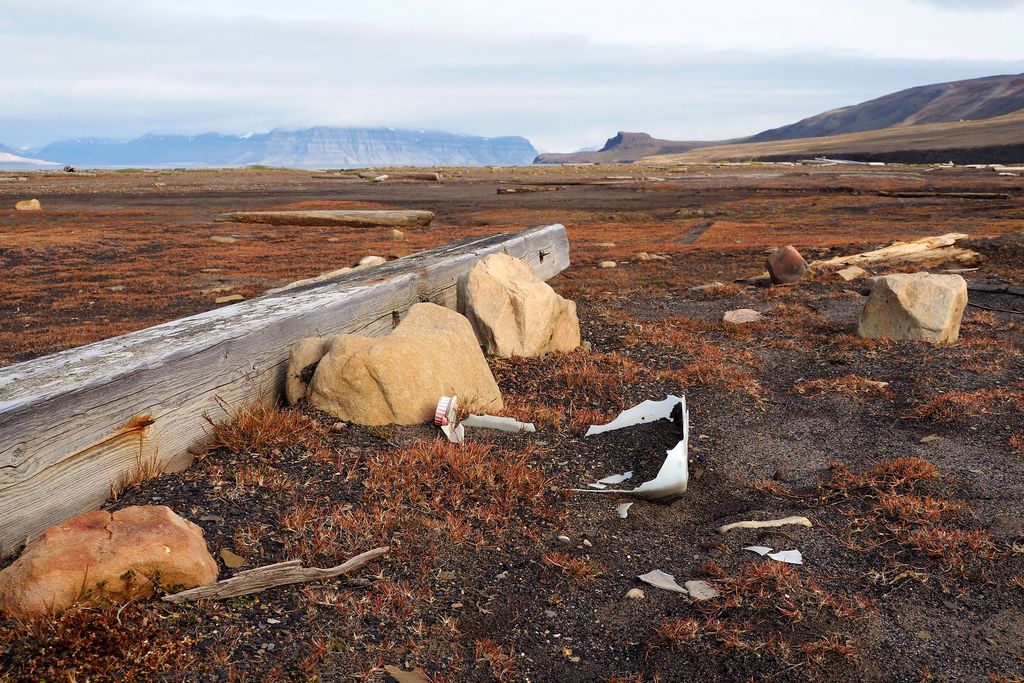 Due to conditions existing in the Arctic, plastic waste scattered on its shores quickly becomes brittle, which makes the process of degradation take less time than usual. © Barbara Jóźwiak (from the archive of Fundacja forScience)

The process of plastic degradation, however, does not stop at a microscale. This led to the coining of the term “nanoplastic”, which denotes plastic particles for which the appropriate measurement unit is one millionth part of a millimetre! And although it might seem that such a level of degradation is no different from the oh-so-desired “disappearance”, we must realize that the degradation of synthetic materials is a far cry from the fate that awaits a leftover carrot, fallen tree or, ultimately, our own mortal shell. This is because, instead of breaking down into simple organic elements (biodegradation), plastics merely break up into smaller and smaller pieces, which – despite their diminutive size – are still plastics and, along with a wide repertoire of chemical additives, accumulate in the environment. According to the strict rules of scientific objectivity, the current state of knowledge (worrying though it may be) is not sufficient to justify a claim that the growing microplastic pollution will come back to bite. It is not, however, sufficient to be sure it won’t either.

Let’s go back, though, to the Arctic and large litter items, because what is microplastic to macro-animals, which the north polar regions are most readily associated with? They, at first sight at least, are way more bothered by macroplastics, such as lost or discarded fishing gear. Synthetic nets drifting in the ocean pose a serious risk to fish and marine mammals, such as seals or whales, and once they’ve been washed ashore they become dangerous for land mammals (mainly reindeer) and birds. Besides, floating plastic waste items may serve as rafts for alien, potentially invasive species, whose arrival in the Arctic might seriously upset the area’s delicate ecological balance. Plastic is also a carrier of bacteria, pathogens and toxic organic compounds, which slowly but surely leak into the environment. If all this wasn’t bad enough, battered by Arctic storms, waste items gradually break into smaller pieces and get covered with the so-called biofilm (or a thin layer of slime), which makes them difficult to tell apart from food, a problem especially serious for local seabirds. Once ingested, plastic fragments are impossible to digest and hard to excrete. Waste items washed ashore undergo further degradation and fragmentation, turning into plastic confetti, which finally vanishes out of sight, buried in the soil or washed back into the ocean. And although this kind of plastic is hard to get tangled up in, it does come with various problems of its own. There is evidence, for instance, that microplastics change basic physical properties of the soil, which may, among other issues, increase the rate of erosion. In water, on the other hand, microplastics make it onto the menu of even the smallest organisms, such as plankton, which are – in turn – staple food for hundreds of other species. Harmful substances leaking from microplastics accumulate in organs and tissues (especially the fatty tissue, which the animals of the Arctic have a lot of) and their concentration increases with each consecutive link of the food chain. Toxins from plastic disrupt hormonal activity, affecting many vital functions of the organism, such as growth, metabolism and reproduction. You can see for yourself, therefore, that from the perspective of macro-animals and the entire Arctic ecosystem, microplastics are actually a mega-problem. And the situation is about to get worse.

For a typical reindeer, getting tangled up in a fishing net is much easier than getting untangled, especially when we take into account how durable modern nets are. As a result, the unlucky animals remain on the beaches, unable to move, where they starve to death or become easy prey for predators. © Barbara Jóźwiak (from the archive of Fundacja forScience) 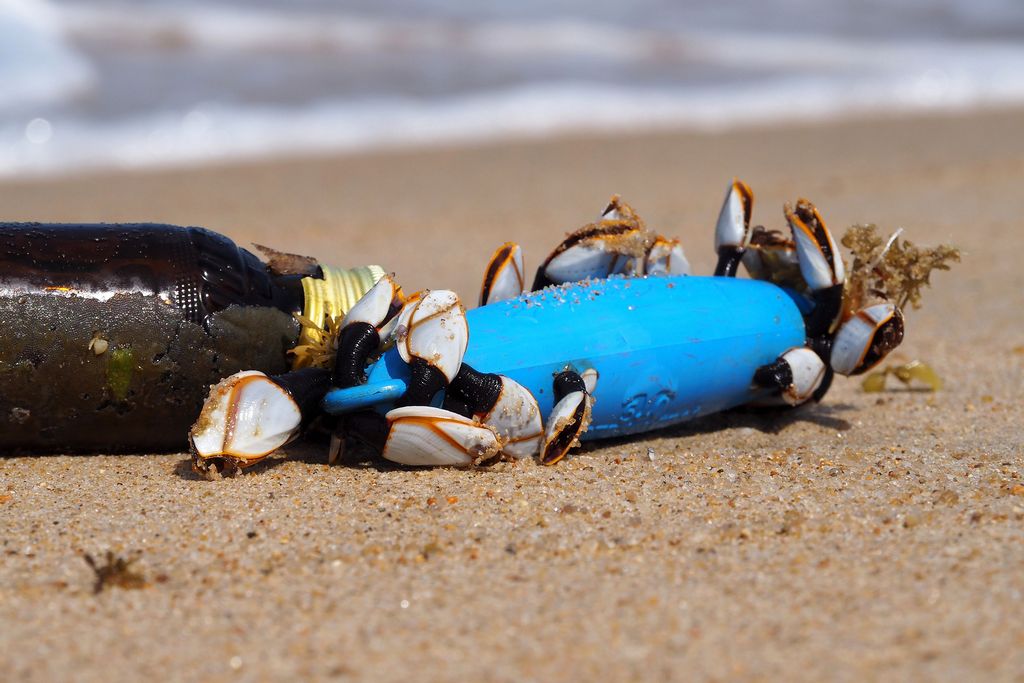 Goose barnacles are crustaceans which often travel the world attached to floating plastic litter. Even though they’re most at home in the tropics, scientists from the Institute of Oceanology of the Polish Academy of Sciences came across a few individuals in Svalbard. © Barbara Jóźwiak 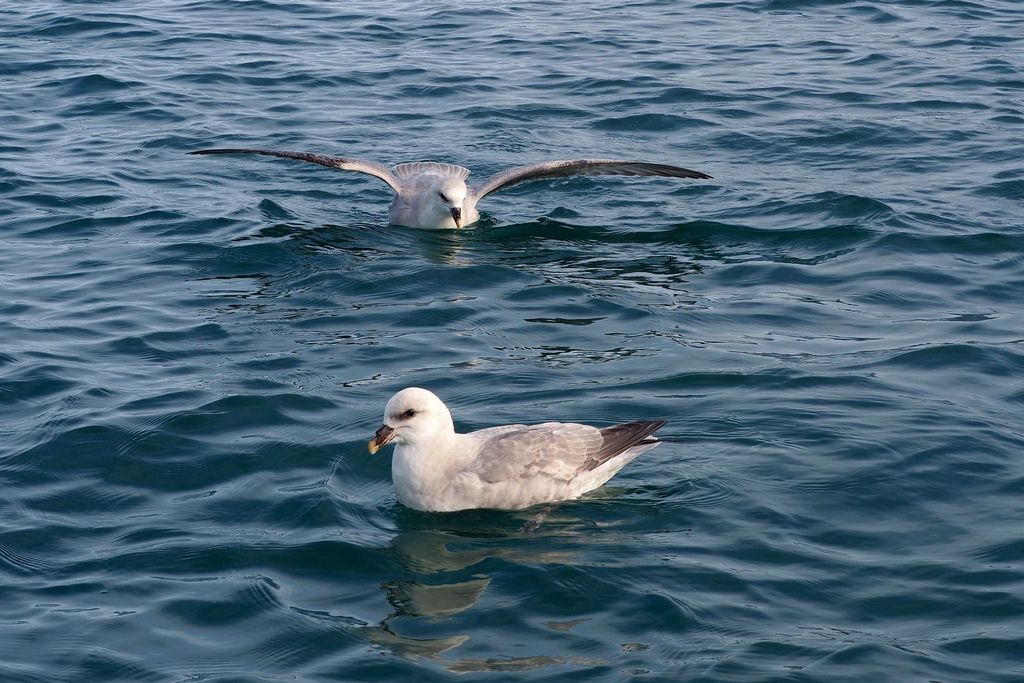 Due to their feeding style, northern fulmars regularly ingest bits of plastic. Research work carried out in Svalbard suggests that about 95% of all birds in the fulmar population have fragments of plastic waste items in their stomachs. © Barbara Jóźwiak

Even if, hypothetically speaking, the amount of plastic waste in marine and coastal environments stayed precisely at its current level, the concentration of microplastic particles in the world’s oceans could as much as double by mid-century. This is because of macroplastics accumulated so far in the environment, which no one feels responsible for and – as we’ve mentioned before – few people even notice. And that’s too bad, because if we want to reduce microplastic pollution instead of only studying it, it is the macroplastics we should be focusing on, as they must be removed from the environment before inevitable processes of degradation and fragmentation turn them into unremovable microplastics.

Although the issue of environmental pollution with broadly-understood chemical substances (including macro- and microplastics) still holds a number of scientific secrets, one thing is already quite clear. We’ve gone too far. A recent article entitled “Outside the Safe Operating Space of the Planetary Boundary for Novel Entities” demonstrates it beyond any doubt. Chemical pollution threatens the integrity of the Earth’s ecosystems much like climate change and biodiversity loss. And although each of these issues is usually considered on its own, they are in fact inextricably linked. We’re already aware of some of the damage inflicted on flora and fauna by mismanaged plastic waste, but this doesn’t nearly exhaust the topic. Plastic (its production, transport, disposal and degradation) generates enormous greenhouse gas emissions, which leads to further climate destabilization and further loss of biological diversity. It seems, therefore, that while scanning the media for the latest revelations about the risks posed by plastics large and small, we have lost sight of what’s in fact the most important: synthetic materials, no matter their size, are one of the key ingredients in the recipe for a global ecological catastrophe. A catastrophe we’re unlikely to emerge from unscathed.

4ocean (2020-04-02) What are microplastics? And why you should care [blog post], https://www.4ocean.com/blogs/blog/what-are-microplastics-and-why-you-should-care

Dzombak, R. (2019) There is no escaping the reach of plastic pollution. Pacific Standard, https://psmag.com/environment/there-is-no-escaping-microplastic-pollution