Penguins are among the most popular animals on the planet. After all, what is there not to like about these cute, flightless inhabitants of Antarctica? Even though the birds are usually associated with cold regions, there are also species which enjoy warmer climate, like the Galapagos penguin (Spheniscus mendiculus), endemic to the Galapagos Islands, or the African penguin (Spheniscus demersus), which inhabits the southern tip of Africa.

If we’re asked to picture a penguin in our minds, most of us will probably summon up an image of an elegant individual in a black tailcoat and a white shirt. Not everyone, however, realizes why the universal penguin uniform looks the way it does.

Penguins are specialized marine birds, which come ashore only to breed and never venture beyond the coastal zone. They feed in water, actively hunting for krill (crustaceans similar to shrimps), cephalopods (such as squid) and fish. They too, however, are actively hunted by marine predators like the leopard seal (Hydrurga leptonyx) or killer whale (Orcinus orca). The characteristic colouring of the penguin provides camouflage, which makes the bird harder to spot from the bottom, as its white belly blends into the sunlit surface of the water, and from the top, because its black back is virtually invisible against the dark of the deep ocean.

This basic penguin apparel may sometimes be embellished with bright elements, like the pale-yellow breast and bright-yellow ear patches of the emperor penguin (Aptenodytes forsteri) or the orange upper neck and cheek patches of the king penguin (Apterodytes patagonicus). There is also, of course, the macaroni penguin (Eudyptes chrysolophus), which is a bit shorter than the previous two, but comes with an extravagant golden crest on its head and a pair of devilish red eyes.

Despite being by far the most widespread, these colour combinations do not exhaust the options available to the above-mentioned penguin species, as they may sometimes exhibit interesting colour aberrations. The term “aberration” comes from Latin (ab = from and errare = to stray, or aberratio = deviate from the usual state) and the condition it denotes is often caused my genetic mutation and thus extremely rare.

Plumage colouration in birds results from the presence of various pigments in their feathers. The most common are melanin pigments, of which two types have been found in birds: eumelanin (black) and pheomelanin (brown). Yellow, orange and red colours are due to carotenoids, which are also very common. The only exception is the colour blue, which – unlike the colours mentioned so far – is the effect of the feathers’ structural quality and the ways in which they scatter light. If a genetic mutation leads to one or more pigment not being properly synthetized or affects the structure of the feathers, there occur plumage aberrations.

There are a few different types of colour aberration that can be found in penguins. In the past, all of them were referred to as albinism. Nowadays, however, the term is only used to describe a complete lack of pigment (melanin) responsible for the colouration of feathers, skin and eyes. Albino birds are, therefore, characterized by totally white plumage, reddish eyes (caused by the lack of pigment in the iris, which allows the blood vessels at the back of the eye to show through) and pale skin.

Much more common than albinism is the so-called leucism, in which case the skin may produce a small amount of pigment. Leucistic birds have a standard colouration of eyes, beaks and legs, but no pigment in skins or feathers. In other words, while an albino animal will be totally white, a leucistic individual will still have stripes, spots or other patterns typical of its kind.

Another colour aberration affecting penguins is isabellinism. It is a form of pigment dilution caused by a mutation which lowers the concentration of melanin in the bird’s body. As a result, the areas which are normally dark are a pale grey-yellow colour instead (or a slightly darker pale brown). The condition is allegedly named after a certain archduchess who kept her underwear on for three years before she finally gave in and took it off… It is worth noting that there is no general agreement among ornithologists as to the terminology associated with particular colour aberrations. Consequently, isabellinism is often perceived as the same condition as leucism, even though the latter involves a complete lack of eumelanin and pheomelanin in the bird’s feathers.

Another type of colour aberration is melanism, which involves overproduction of melanin. The plumage of melanistic birds is darker than usual, as was the case with melanistic king penguins observed in the colonies of South Georgia.

Is this complex categorization significant for out flightless protagonists? It is and hugely so. In the animal world, just like in the world of humans, being different may lead to rejection or spark an increased interest in the individual’s uniqueness. Unfortunately, it is the former that’s usually the case. Albinism is considered a genetic defect and the predicted life expectancy of albino individuals is lower than that of typically coloured ones. It is mainly because a distinctly coloured bird is more prone to predation, as predators find it easier to locate and then follow a penguin that clearly stands out from among his black and white companions. If this wasn’t bad enough, distinct colouration makes it harder for penguins to find food too, as it is not just predators that find them easier to notice, but also their potential prey.

Within their own species, albino individuals are frequently met with disapproval. In the case of the Adélie penguins, the dark colour of the head contrasting with the white rings around the eyes is a feature especially sought after in a future mate. Uniformly light individuals are thus often doomed to loneliness. This, however, is not the rule and described in professional literature are cases of effective mating and reproductive success involving unusually coloured penguins.

Another aspect of plumage aberration is that the mutation that causes it is likely to affect not just the colour of feathers, but also their structure, making them less resistant to outside conditions. Albino birds have poorer eyesight too, which is yet another obstacle in their struggle for survival. All in all, colour aberrations make penguins less adapted to living conditions, which are often a serious challenge even to individuals without genetic mutations. The only exceptions are some variants of isabellinism, as penguins whose feathers are brown instead of the typical black seem to live a life not much different from that of their conventionally coloured kin.

Because colour aberrations come with a range of negative side effects and invariably lead to higher mortality, they are seldom observed in adults in the wild. Whenever they are observed, however, they’re a source of much joy to the lucky observer. 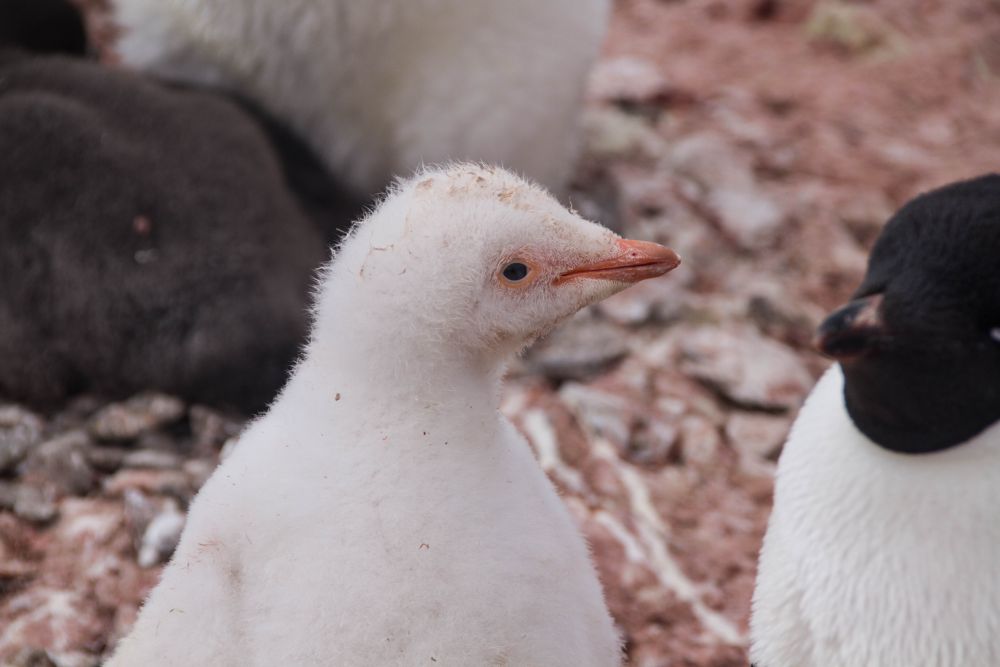 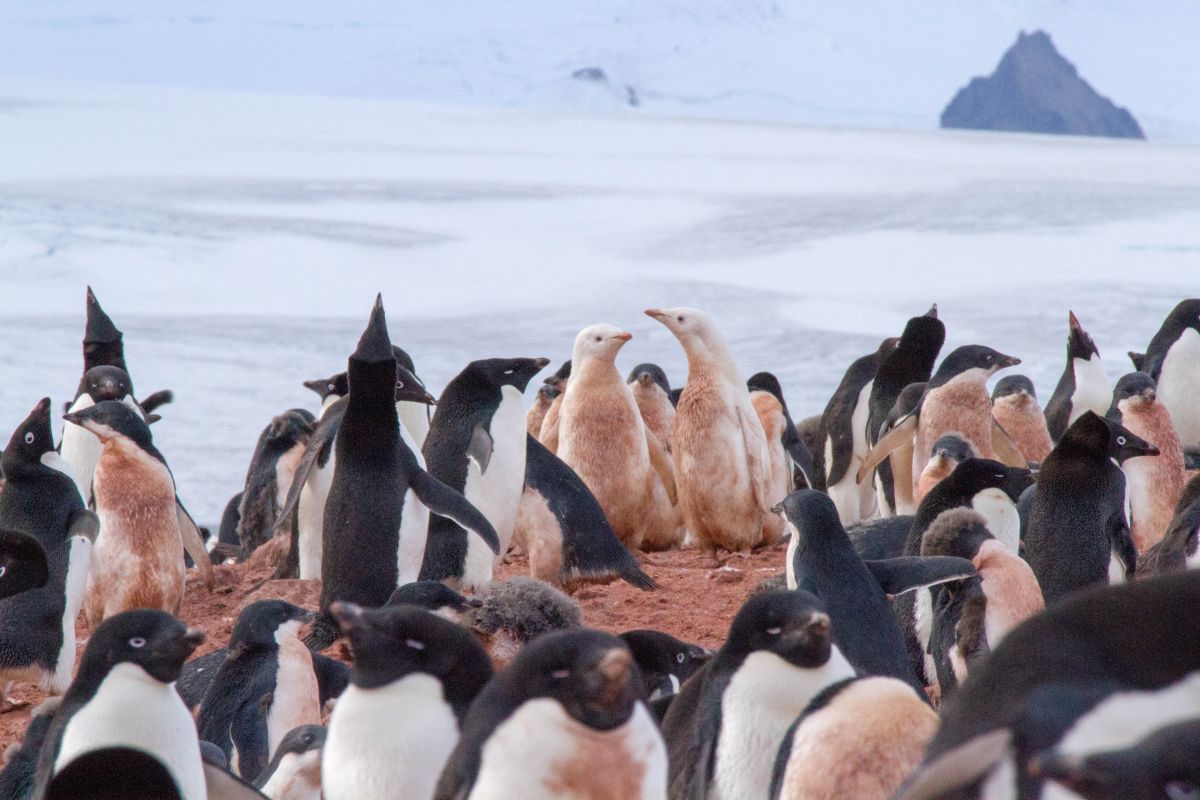