When we think of the Arctic, the first images we summon up in our minds are usually of glaciers and polar bears. And that’s quite correct, as the Arctic is, for the most part, covered with glaciers or ice sheets and inhabited by the world’s largest land predator. But there’s more to the Arctic than that. Found in the area is also, or maybe most of all, the Arctic tundra, which is the northernmost type of vegetation in the world.

We’re often told at school that in the far north grow only mosses and lichens, a myth which we debunk straight away, as the Arctic tundra is home to a range of low growing plants, which are in fact dwarf trees (Fig. 1). To most observers, they are not nearly as spectacular as icebergs or the above-mentioned polar bears, but it’s these tiny plants that tell the story of what the Arctic climate was like in the past.

Tundra – the miniature forest of the north

A gardening hand trowel, pruning shears, a small hand saw, masking tape, ziplock bags and a GPS device are what my basic field equipment consists of. I’m heading out to study tundra shrubs, which are the northernmost plants in the northern hemisphere and today I’m taking you along on a virtual polar expedition. When looked at from the other side, tundra is the type of perennial vegetation found the closest to the North Pole. I usually call it a miniature forest. Yep, you’ve read it right, a forest, because what else are dwarf willow or birch trees if not the cousins of tree species found a bit further south in the taiga? In fact, when you consider tundra shrubs and their large-scale equivalents, which is to say trees like those found outside our windows, from the point of view of wood structure, they turn out to be almost identical.

I keep saying that if you want to see the forest in the tundra, you need to lie down. So now, dear readers, let’s lie down on the floor and imagine it’s the Arctic tundra. Don’t be shy, it’s actually rather soft and comfortable. In the low Arctic, such as Northern Alaska, tundra growing in moist habitats may be taller than a man, so lying down in it we’ll be totally invisible. Further north, however, tundra vegetation grows so low that it’s readily visible only in the summer, when it forms a thin green carpet. In the high Arctic hiding in the tundra is not an option and even if we totally flatten ourselves against the ground, we will still be in plain view of bears and reindeer.

Despite their diminutive size, tundra shrubs are a treasure trove for those who care to look close enough to see the structure of the plants’ tiny growth rings, which they produce on an annual basis, much like the trees in our immediate surroundings. Looking at a tree stump in a nearby forest, we can easily notice annual growth rings, which are perhaps the most striking in coniferous trees, where each ring consists of a light band (the so-called earlywood) and a dark band (latewood). Tundra shrubs are very similar, although they are predominantly deciduous species with a less marked anatomical structure of wood. The science which deals with growth rings is dendrochronology (Krąpiec and Zielski, 2004) and its methods are successfully employed to study the far-away Arctic tundra.

The most significant difference between our trees and the tundra shrubs is that the overall size of the latter and the size of their rings are much smaller than what we’re used to in our climate zone. In order to see the Arctic rings we must, therefore, use a microscope. And a good one too, as the growth rings of a dwarf willow from central Spitsbergen, which we are currently examining, are on average only 50 microns, or 0.05 mm thick! This is because of the harsh Arctic climate, short growing season, fierce winds, long snow cover duration and nutrient-poor soil. But although, from the point of view of plants, living in the north is no picnic, they still manage to live impressively long lives.

The Arctic summer is not only short and cool, but also preceded by the longest winter on earth. Even though this hardly sounds like a recipe for favourable living conditions, the plants of the tundra have developed a range of adaptations, which help them make the absolute most of the little they have. Every year, as do trees in our climate zone, a tundra shrub produces a single growth ring, which often looks more like a wedge (Fig. 2). But it’s not the shape of the ring that’s key here, but its width. A long and warm summer is usually recorded as a wide ring, while a short and cool summer takes the form of a narrow ring which may be irregular or even partially absent. For every tundra shrub, therefore, scientists determine the average width of the growth ring formed in a given year, which makes it possible to establish a chronology, or a sequence of dimensional growth ring data corresponding with specific calendar years (Fig. 3).

Every now and then, the summer in the high Arctic may be so cold and the conditions so severe that some tundra shrub may not form growth rings at all. That’s why it is so important to study the population of a given plant and compare the growth ring pattern in different parts of individual plants (as they form rings both in aboveground and underground stems) and within groups of plants found in a given area. It may sound complicated and it definitely takes plenty of time, but if we’re patient and curious enough, we may finally piece the puzzle together and establish the growth chronology of a given shrub species in a given Arctic location. The resulting curve reveals much information about the climate, especially the summer temperatures occurring in a given area during the plants’ lifetime. And the older the plants are, the longer period of climate reconstruction from shrub rings.

Much is being said at the moment about climate warming, which is particularly rapid in the Arctic, and it might seem that higher temperatures will let tundra shrubs grow better and form wider rings. The truth, however, is a bit more complicated than that. There’s no denying the fact that in most places in the Arctic, the ongoing climate warming is making shrubs grow taller and expand to new areas (Myers-Smith et al. 2015, Bjorkman et al. 2018).

The latest research suggests, however, that moisture availability plays an increasingly important role in the development of tundra shrubs in the far north (Gamm et al. 2018, Buchwal et al. 2020, Owczarek et al. 2021). The same is true for the alpine tundra, for example in the Alps (Francon et al. 2021). These findings are rather alarming as they may imply that tundra shrubs cannot keep up with climate changes, which from their point of view are simply too abrupt. The warmer Arctic is in many regions also a drier Arctic, which is anything but favourable to tundra shrubs, because – just like any other plants – they need appropriate temperature and enough moisture to growth.

How old is the oldest shrub in the Arctic? This is the question I get asked the most often, the question that still remains unanswered. The oldest specimens in our plant collection in Poznań are dwarf birch trees from northern Alaska and western Greenland, which are over a hundred years old. Much older are dwarf junipers from south-western Greenland (over 230 years old) and from subarctic regions of northern Sweden (over 300 years old). When Poland was going through the upheaval of Napoleonic wars, up there in the far north (which was at the time experiencing the so-called Little Ice Age and was, therefore, a lot colder than it is now) tundra shrubs were calmly going about their business of growth ring formation. With not a single meteorological station operating back then in the Arctic, the climate record in their tiny rings is an invaluable source of information. We might even say that the woody plants of the tundra were a sort of an early Arctic meteorological service, patiently recording the average air temperature of the growing season for each passing year of their lives.

Looking to the future

Polish researchers of polar regions have been examining the annual growth rings of shrubs in the Arctic for over a decade. Studies on dwarf willows have been conducted among others in southern Spitsbergen (Owczarek 2009, 2010a, 2010b, Owczarek et al. 2014, Owczarek and Opała 2016), central Spitsbergen (Buchwal et al. 2013, Buchwal 2014, Siekacz 2016, Le Moullec et al. 2019), western Greenland (Hollesen et al. 2015, Buchwal et al. 2015), north-eastern Greenland (Buchwal et al. 2019), the south-eastern part of Hundson Bay (Opała-Owczarek et al. 2018), northern Alaska (Buchwal et al. 2020) and the Bear Island (Owczarek et al. 2021). Even though similar studies have also been carried out by a number of research teams abroad, many regions of the Arctic are yet to be investigated. This means there is still much room for the exploration of the Arctic and its climatic past as recorded in the annual growth rings of tundra shrubs. Who knows, maybe even one of you, dear readers, will develop a scientific passion for the miniature forests of the far north. If you do, you certainly won’t regret it, because there’s nothing quite like exploring the mysteries of the Arctic, where tiny brave plants have long been recording the climatic history of the northernmost edges of the Earth. 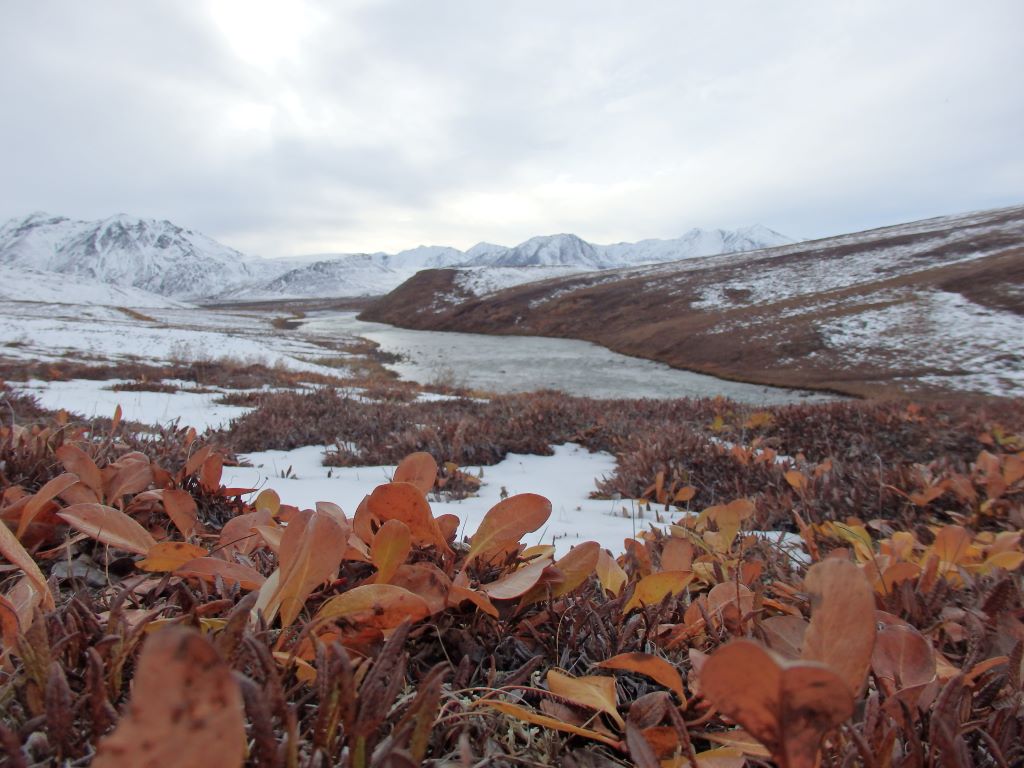 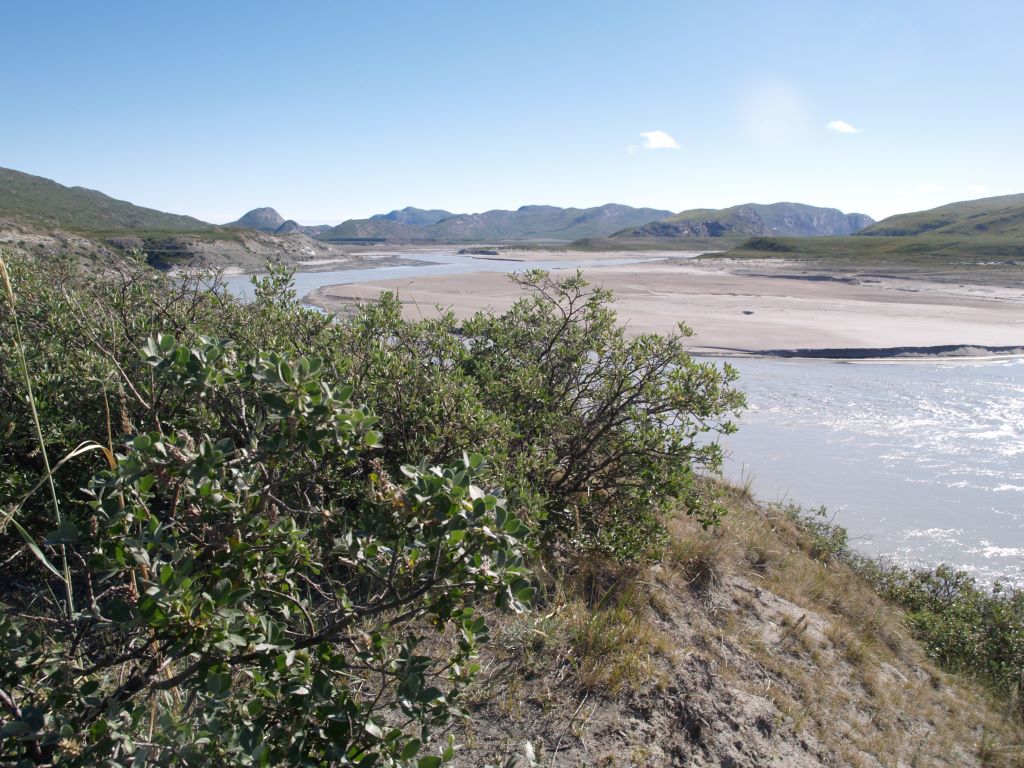 Fig. 1. Tundra shrubs in the Arctic: (top photo) the Brooks Range in Northern Alaska at the beginning of September, with dwarf willows and oaks in the foreground; (bottom photo) the area around Kangerlussuaq in western Greenland at the end of July, with two species of willow, whose height exceeds 1.5 m. 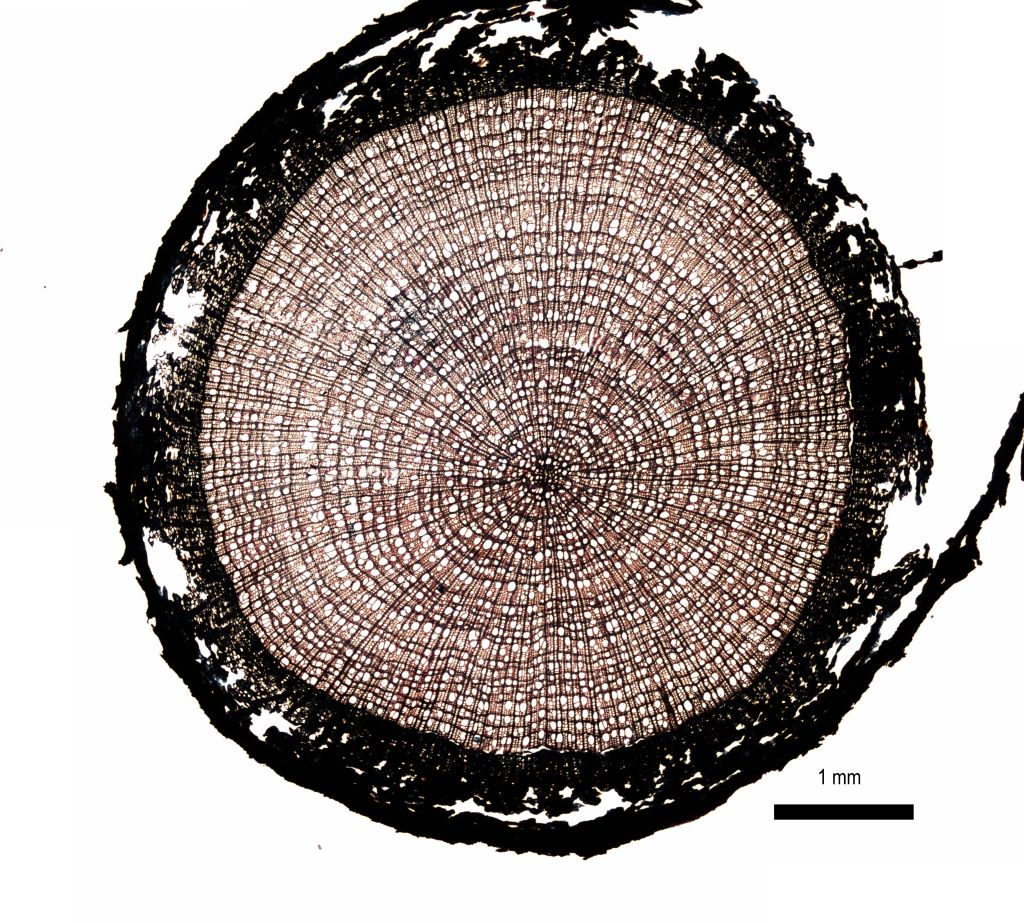 Fig 2. Annual growth rings of an Arctic willow from central Spitsbergen as seen under a microscope. In order to get such an image, we must first prepare a very thin microslide. To do so, we use a special cutting tool known as a microtome to cut a selected part of a plant (usually the main root or stem) so that we obtain a cross section. We then colour the slice with a mixture of two pigments (red and blue) to enhance the contrast between individual anatomical structures. The dark outer circle is thick bark, which protects the plant against harsh weather conditions. 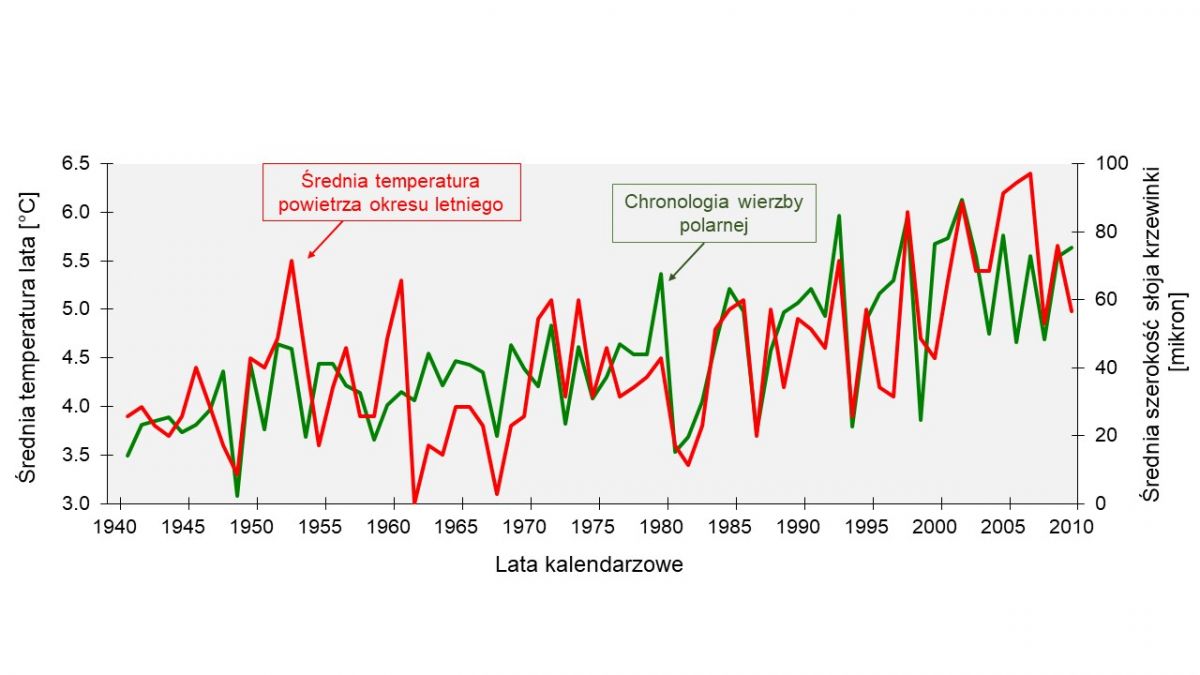 Fig. 3. Chronology of the Arctic willow from central Spitsbergen (green line) for the years 1941–2010, determined on the basis of detailed growth-ring dating of 10 woody plants and the total of 142 cross sections (see: Buchwal et al. 2013). The chronology of the Arctic willow was compared with the average summer (i.e. June to August) air temperatures recorded at a meteorological station located near the town of Longyearbyen, in central Spitsbergen (approximately 70 km from the area where the woody plants were collected). Studies of climate–growth relationship for the Arctic willow in this specific location suggest that wide rings formed during warm summer seasons, while narrow rings were typical of colder years.