A short story about birds, the sea and the emerald glow of Spitsbergen - Edu Arctic

A short story about birds, the sea and the emerald glow of Spitsbergen

Spitsbergen is not only glaciers and ominous mountain peaks, but also lush, low-growing tundra, which looks much like verdant green carpets covering the coast. In some areas, during the polar day, the green is striking enough to be visible from a considerable distance, leaving spectators gaping in disbelief at the dazzling green glow of the Arctic. If you’re lucky enough to visit Spitsbergen in July or August, you’re bound to notice large swathes of vegetation at the foot of mountain slopes. Get a bit closer and you’ll soon realize that something crazy is going on all around you. Suddenly, the faint buzz of the Arctic becomes a cacophony of bird calls and the sky gets crowded with thousands of birds flying back and forth between the colony and the sea, on which they rely for food. Every lover of the Far North – and especially of Spitsbergen – should know what links these birds with the sea and the lush Arctic vegetation, and why the connection is so important.

In late spring, when Spitsbergen is slowly emerging from under the snow, birds return to the colonies they left in autumn. A bird colony is a magnificent sight, which can hardly be forgotten or compared to anything else. Ornithologists and scientists studying tundra ecosystems in Spitsbergen claim that the island’s coastal areas constitute a handbook illustration of basic relationships between the sea, the birds and tundra ecosystems. In the Arctic regions, birds play a crucial role, linking nutrient-reach marine ecosystems with nutrient-deficient terrestrial ones. During the summer, birds feed in the sea and nest in large colonies located on mountain slopes or rock ledges. These colonies have a tremendous impact on the adjacent land ecosystems. How exactly? The birds produce large amounts of guano, or bird droppings, which are a splendid natural fertilizer for the many species of plants living in the tundra.

Let us not, however, get ahead of ourselves. The constant daylight of a polar summer stimulates the development of phytoplankton (microscopic water-dwelling plant organisms) in the Arctic waters. Phytoplankton makes it possible for Arctic marine ecosystems to thrive. It is food for zooplankton (microscopic animals), which is food for fish and birds, which are – in turn – hunted by seals and foxes. Seals get eaten by polar bears, while the large surplus of phytoplankton sinks to the bottom of the sea, where it becomes a source of nutrition for benthic organisms (organisms living on the seabed), which are on the menu of, for example, walruses.

Phytoplankton is a precious resource used directly or indirectly by all birds living in the Arctic. If you visit Spitsbergen in summer, a few bird species are sure to draw your attention. Despite harsh conditions, they absolutely love it in Spitsbergen and one of the reasons for their enthusiasm is easy access to abundant food, whose fundamental component is the above-mentioned phytoplankton. The most charismatic and numerous of all bird species in the Arctic is the little auk (Alle alle), sometimes referred to as the dovekie.

This black-and-white bird, the size of a man’s fist, nests on mountain slopes, in a maze of small tunnels among rock debris. Despite its apparent clumsiness, it plays a highly significant role in the functioning of terrestrial ecosystems in the Arctic. The little auk feed on copepods, which are a group of small crustaceans found in marine habitats. When you approach the colony, you may see them fly out to the sea and back to their nests, making the sky above your head look like a busy highway. There are no exhaust fumes to worry about, but the risk of getting pooped on is very high indeed.

Scientists from the University of Gdańsk have spent many years studying the little auk and their impact on tundra ecosystems. Thanks to their work, we now know that the little auk colony located in the vicinity of the Polish Polar Station Hornsund can produce as many as several tons of guano within a single summer season! It fertilizes the slope and the foot of the mountain, enabling the growth of a bright green carpet of lush vegetation. The carpet is not only large, but also surprisingly thick. Step on it, a you’ll sink in knee-deep! Apart from bird droppings, the colony and the area around it is strewn with feathers, egg shells and dead individuals, which gradually decompose, further contributing to the well-being of tundra ecosystems by providing them with additional nutrients (such as phosphorus and nitrogen compounds).

Plant biomass near a little auk colony is significantly higher than in the areas located further afield. This has an impact on the biomass and population size of microscopic tundra animals, such as springtails (Collembola) or tardigrades (Tardigrada), also known as water bears. These tiny animals, although invisible to the naked eye, serve an important function in the circulation of matter in polar ecosystems and considerably boost local biodiversity. When strolling near a bird colony, you’re likely to come across reindeer (Rangifer tarandus platyrhynchus), which readily visit the area to feed on the lichens generously fertilized by the colony’s air-borne occupants. If you look more closely, you may also spot an Arctic fox (Vulpes lagopus) in its summer coat, waiting for chicks unable to make it to the sea to literally fall at its feet.

It is also worth mentioning that little auks or – to be more specific – local consequences of their presence attract other bird species. Barnacle geese, for example, as typical herbivores, treat the area around little auk colonies as open-air feeders. Large glaucous gulls, on the other hand, visit the colony to hunt the little auk, which they feed to their young. In 2003, Dorota Adamkiewicz and Joanna Łęska made a documentary entitled “Mały alczyk. Wielka sprawa” (or “Little auk. Big issue”), which is a must-see for anyone keen on ornithology, ecology and Arctic beauty.

Birds on the edge of a precipice

Spitsbergen’s rock ledges are home to fish-eating birds, such as guillemots and black-legged kittiwakes. Looking up at a rock ledge lined with bird nests, you realize just how brilliant Mother Nature and natural selection are in terms of making birds adapted to particular conditions. Towering cliffs are far from hospitable. One false move is all it takes for a chick to fall out of its nest and down the rock face. Even if it survives the fall, it will most probably be killed by Arctic foxes, which patrol the area in search for food for their young. Birds nesting on near-vertical rocky cliffs affect the land ecosystem differently than the little auk, which nest on gentler mountain slopes.

Because guillemots and kittiwakes live on a different diet than little auks, their guano is also different and so are the plants found around their nesting sites. Besides, guillemot and kittiwake colonies are generally located right on the coast, which means that some of the nutrients go back to where they came from, which is to say, to the sea. Other plant species and different pH than in the areas surrounding little auk colonies support other, unique invertebrate assemblages. Moreover, guillemot and kittiwake colonies are sometimes visited by none other but the king of the Arctic – the polar bear (Ursus maritimus).

Polar bears, whose main source of food is seals, rely on sea ice as a hunting platform. Unfortunately, the extent of sea ice has been shrinking rapidly in recent years, as a result of which polar bears find it increasingly difficult to catch seals during summer months. There is some scientific data to indicate that starving polar bears occasionally visit bird cliffs to look for plants rich in vitamin C. It may seem strange, but bears do have plants on their menu and this includes both marine and terrestrial plant species. In water, bears often feed on brown algae known as Laminaria, while on land they seek out lyme grass (Leymus arenarius). Besides, as we’ve already mentioned, they visit bird colonies for an extra supply of vitamins. Colonies of guillemots and black-legged kittiwakes are great places for scurvy-grass (Cochlearia groenlandica), which is especially rich in vitamin C. In the past, the plant was often used by travellers and the Inuit to prevent scurvy.

As we all know, the world is getting warmer and warmer, and the changes are much quicker in the Arctic than anywhere else on the planet. Scientists have long noticed that the growing temperature of Arctic waters causes an increase in the amount of zooplankton typically found in warmer areas. Why is that problematic? The little auk, for example, feed on nice and fat, high-energy Arctic copepods, which are gradually replaced by smaller, non-Arctic species, which are less nutritious and harder to catch. This may well lead to a decrease in the size of bird colonies, which will – in turn – affect the form and the functioning of the lush green carpets of vegetation covering the slopes of Spitsbergen, diming the island’s extraordinary emerald glow. 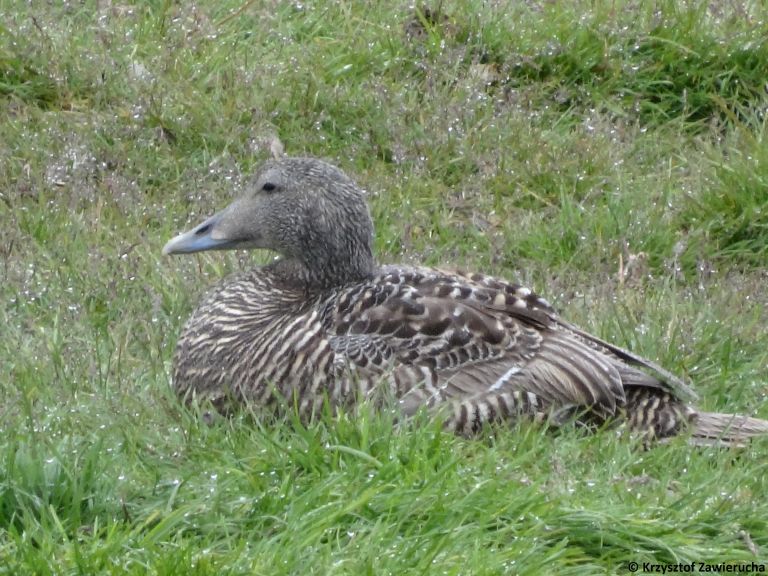